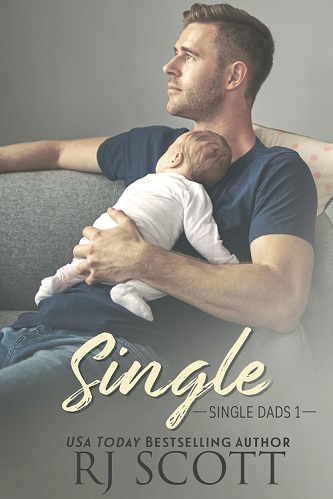 Blurb: Ash wants a family, and is determined to continue with a surrogacy he’d begun with his ex. Bringing baby Mia home, he vows that he will be the best father he can be. Nothing in this world matters more to him than caring for his daughter, not even accidentally falling in lust with the doctor next door. Challenged by his growing attraction to Sean, and confronted by painful mem-ories of his family, Ash has to learn that love is all that matters.

When ER doctor Sean moves in with his friends next door to sexy single father Ash, he falls so quickly it takes his breath away. The sex they have is hot, but Ash is adamant his heart is too full with love for his daughter to let anyone else in. Why is Sean the only one who sees how scared Ash is, and how can he prove to his new lover that he desperately wants the three of them to become a family?

Review: Single is the first book in RJ Scott’s Single Dads series, which its pretty easy by the end of this book to see that this is following smoking hot first responders in their quest for love.

I’ve only recently got back into reading RJ Scott, and most of that has been her hockey romances. Before that I read some of her Ellery Mount series. Regardless, I knew that this is an author whose writing style I enjoy, I find the plots engaging and the characters totally relatable and irresistible.

This is perfect for anyone that loves men and babies/children, single parents finding love and of course if you love a sexy doctor! I feel it ticks all the character traits that are irresistible for many romance readers.

The story follows Ash and Sean.

Ash is the single dad of the story. He’s wanted children for so long and had started investigating surrogacy with his ex. When his ex (a marine biologist that gives the rest of us a bad name, lol) leaves just as the surrogate got pregnant, Ash knew he was on his own. Life as a solo is parent is hard, obviously, no one would ever say that it is a walk in the park, and this was what really had me drawn into the book. It was not a rosy picture. Ash had so much support from his twin sister, who has two children of her own, but he now he had to get back into his own home and start a routine for his little princess, Mia. He’s stressed and so when one night he has his new, albeit drunken, neighbour banging on his front door one night when he finally got Mia to sleep, Ash is pissed off.

That drunken neighbour was one of the three very single men who moved next door, who Ash hasn’t met at all yet. After a bad call, that particular neighbour went out on a bender to drown his sorrows. His friends wrangle him after it was clear that the he stumbled to Ash’s place because the homes look so alike. This is how he meets the other two neighbours, but it’s Sean in particular that just makes Ash feel more discombobulated.

Sean is an ER doctor, not the most glamorous of first responders, but he is a doctor, and in romances where all us fickle people swoon over certain types, a doctor is certainly up there. Sean is instantly attracted to Ash, but is going to have a difficult time to make it through the man’s defences. First because of the awkward introduction to each other, and then later because Ash is completely stressed out trying to be the best dad in the world.

And while love isn’t instantaneous, these guys slowly get to know each other, which Mia in the mix. That is what I liked the most, this wasn’t an instant happy family. They had a simmering chemistry that complimented the overall tone of the book and the characters that I really liked. It is sweet and gentle, but there is depth to the characters and some depth to their emotions (although not as much as I would want of the latter).

This was a wonderful story and the ending hints to us about book 2, which I’m totally excited for.