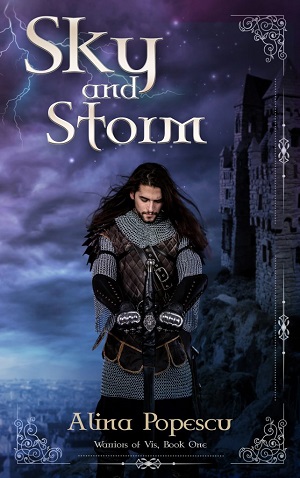 Blurb: Two childhood friends reunite for what should be a most joyous event: their wedding. Sky is a rural noble family’s son, Storm is the warrior prince of the kingdom, and they haven’t seen each other in years.

Storm, the Dragon of Vis, wedding Sky Moonborn takes the entire kingdom by surprise. Everyone opposes Storm’s choice: the king and queen, the heartbroken youths of Vis whose dreams of high status have been crushed, and the prized heirs to the kingdom’s allies. None of them, however, is so decidedly against this sudden marriage as Sky himself.

Since turning sixteen, Storm has spent his life waging war against neighboring countries and making them bow to his will. Rumors about his viciousness and unmatched talent for killing have roamed the lands of Vis and turned Sky’s heart to ice.

Amidst court intrigue, military conflicts, and an ever-decaying marriage, a whirlwind of hidden truths and feelings bind Sky and Storm together. This thunderous link seems doomed to lead only to destruction. Only a small flicker of hope promises salvation, but will either fan that flame in time?

Review: I really liked this story about Storm and Sky. Their relationship starts out non existant even though they already knew each other from when they were younger. A large part of the drift had to do with Storm’s dad. But that does not come out until later. I feel had they talked instead of ignoring each other things would have been better.

Twists and turns plus a lot of drama not to mention danger when Sky is kidnapped made for an intriguing story. My heart broke for Storm and the sacrifice he made to appease his father when he was younger but it all worked out in the end.

Good read with a great cast of characters that I cannot wait to see more of.