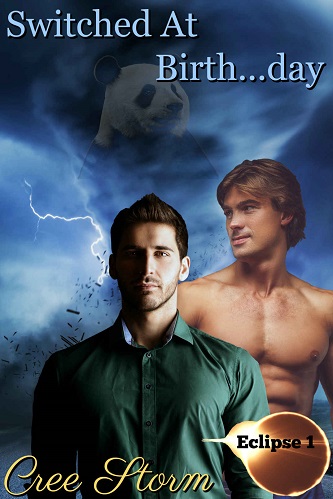 Blurb: Shifters and Paranormals face extinction if they do not begin to mate and begin having children again. The problem is if this happens the Gods will become extinct right along with them. A plan is formed and part of that plan is to switch powers between mates until they claim each other. The changes have been made now the rest is going to be up to them.

Waking up to find out you’re a panda instead of the god you have been raised to be is shocking. Discovering your powers have been switched with your mate’s is a major reason to panic especially when your shifter mate is destroying everything around you with earthquakes and tornados. Can Loki convince Gaby that they were meant to be or will the man destroy them all from his fear.

Review: Matings are not happening as they once did and that meant no babies were being born. Shifters would disappear forever if no one put a stop to it and that meant the Gods who had created them would also be gone. So the Gods decided to help as much as they could without truly screwing it up.

Gaby is a gorgeous panda bear shifter and he belonged to a group that was as rare as ever. They had shifters that were going extinct. At a meeting among the paranormal’s things are going to get a bit shocking. On their twenty-first birthday they would switch with their mate and then they had to find the mate. So waking up making the house shake might just shake up his world.

Loki is the god of war but also a trickster. He loved to play tricks and jokes on the other Gods, not that they appreciate it. However he might get the biggest shock of all, when he turns into a panda.

Gods sure do make things complicated even for them. I love how this author gives you a story that is unique and fresh. I liked the idea of Loki and Gaby quite a bit. They are funny as hell and I think Gaby was the perfect partner for Loki. Loki likes to play tricks and pranks on others, well the tables were turned on him. Not a lot of drama but a bit of danger was a good sign, as well as some hot sexy times.

I had a blast reading this and can’t wait to get my hands on book two. I can also tell you that this story will be read many times over.