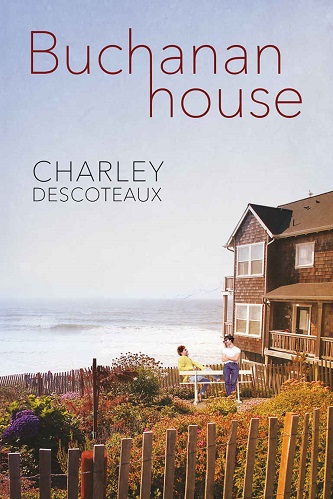 Blurb: Eric Allen and his bestie buy a neglected hotel on the scenic Oregon coast to fulfill their middle-school dreams of co-owning a B&B. The building is in decent shape but in order to turn Buchanan House into the gay resort of their dreams, it’s going to need work.

Tim Tate is a skilled carpenter with many hidden talents, and a body that could grace the pages of a fitness magazine. When he and Eric meet, it’s mutual lust at first sight. Despite the intense attraction, both men are hesitant to fully out themselves by acting on it. But when they give in, it’s obvious that they’ve found something special—and not only in bed.

Before Eric can be free to love the gorgeous handyman they have to make it through the July4th grand opening. With rain that won’t stop and a meddling brother intent on wreaking havoc, can the holiday still go off with a bang?

Pride Weekend:
Overworked cubicle jockey Adam Byron wants to attend Oregon Coast Pride in style but the price of a room at Buchanan House, a popular gay retreat on the central coast, is beyond his budget. So he won’t miss out, he advertises online for someone to share expenses. Corporate drone Silas Grant responds to Adam’s ad, and the two get to know each other via texts before meeting at the coast. They agree on a no-pressure roommate arrangement, yet once they meet face-to-face their attraction is undeniable. Desire might simmer well beyond Pride weekend, no matter how hard Adam and Silas try to live up to their noncommitment pact.

This is a real interesting book that has a really interesting historical background as to the name of the book/the B and B that is brought by the MC and his best mate. This is the second Charley Descoteaux book I’ve read (previously read and reviewed The Pinch of the Game) and I have to say that this one, with all its sweetness and a touch of angst and drama, is my favourite of the two.

I have to say, that there really is one MC of this book, Eric, whose family except for his grandmother rejected him when he revealed that he was bisexual. Years later and now with his grandmother dead, Eric’s bestie Nathan has a plan for the pair to buy an Oregon resort, fix it up and open it up to the gay community. Eric’s love interest is Tim, a handyman who is hired on to help the guys with the odds and ends that need to be fixed up. He really doesn’t come through as an MC as such, not really until the last quarter of the book. I would have loved to have heard more from Tim.

There are a whole other host of minor characters that paint Eric and Tim’s world with colourful and sometimes eccentric personalities. There is also the clash of Eric’s biological family giving him issues, something that I wasn’t completely satisfied with when it was only resolved with a quick phone call and no real explanation.

As I said this is a really sweet book and I thoroughly enjoyed it. This is about a guy trying to make a fresh start and making a pretty good go of it. All in all it is an uplifting sort of book and something that I think would appeal to a general audience.

The historical side note, said in the blurb, the guys name their resort after President James Buchanan – who was a bachelor with a “very close male friend”. Totally fascinating, even if you aren’t from the States, this book has me wanting to read up about Buchanan, though I wish a bit more background was incorporated into the book.

This is a short and sexy read. It such a wonderful glance into the little universe of Buchanan House – named after a potentially gay president.

This is the story of Adam and Silas. They meet each other online and make plans to meet up at Buchanan House for Pride Weekend and hopefully for some hot loving. But the guys get more than they bargained for when romance sparks between them. A lovely story with a satisfying ending, it is just a teaser for the upcoming, full length installment of the Buchanan House series.