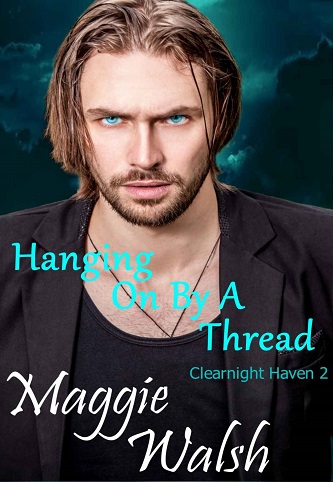 Title: Hanging on By a Thread

Blurb: Fabian Valentine knew that when his best friend, king of the paranormals, Raven Stone, sent him to Clearnight Haven that he would have a big mess to clean up to get this coven back on track, but he never would have guessed what was really going on. Fabian, along with his four brothers, arrive in Clearnight ready to take on the task but are at a complete loss when they start uncovering the true depth of evil that has gripped this town.

Atticus Lovering has always been quiet and shy. Being the smallest vampire in his coven and having an abusive mother had him feeling inadequate most of his life. But when Atty decides to take a chance on love, it turns out to be the biggest mistake of his life and he finds himself trapped in the clutches of human traffickers.

Now it is up to Fabian to track down Atticus and others who have fallen victim. But Fabian’s urgency to save Atticus soon takes on a whole new meaning when he discovers the cute little vampire is more important to him than he realized..

Review: Fabian and his brothers are determined to get the coven back to what it was before corruption blinded them. Atticus is a sweet, shy small vampire who is abused and lonely. Things are set in motion and Atticus is kidnapped by traffickers. Fabian jumps into action to track down the culprits and save those that have been taken.

I liked the story. It was intense at times and I felt bad for those taken against their will. Fabian was intent on his getting the victims back considering he discovers one is his mate.