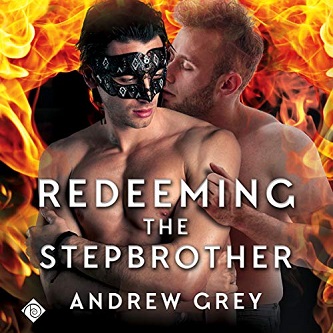 Blurb: Family can be a blessing and a curse, but for artist Florian, it’s a nightmare he longs to escape.

As chief designer for Bartholomew Porcelain Studio, Florian specializes in painting birds. He also watches them in the wild to distract himself from his short-tempered mother, at least tempo-rarily. Florian’s heart is too soft to leave his stepsister, Ella, to suffer alone. Still, he can’t help dreaming about one day finding happiness and love.

When Count Dieter von Hollenbach arrives in town to visit a friend and present an award, he isn’t looking for romance. Then again, he doesn’t expect someone as perfect as Florian to come into his life. To make sure Florian is all he seems and that their connection is genuine, Dieter keeps his title to himself.

But he isn’t the only one with a secret.

At a masquerade ball to celebrate the award, some of the masks fall away, but those that remain in place could destroy the love beginning to grow between them.

Review: Redeeming the Stepbrother is the second book in Andrew Grey’s Tales from St Giles series. Andrew Grey is up there is as one of favourite authors, I always connect with his stories and his characters, and I love the depth and complexity he gives to his MCs. This is, for the most part, based partially of the classic tale of Cinderella. I love books that are either inspired by or are simply a modern MM retelling of the classic fairy tales. Here, Grey only takes elements of the old tale and crafts the lives of people in an idyllic, sleepy town which is dependent on the Bartholomew family porcelain business to hire a great deal of the locals.

The story is the romance between Florian Cinderson and Count Dieter von Hollenbach. Dieter keeps his title a secret for much of the story, and with the last name Cinderson and a stepsister called Ella, it’s clear that Florian is the character to have elements of Cinderella injected into his story.

Florian tends to share the Cinderella story with Ella. Ella is the one that is treated as a slave by her stepmother. Florian misses his deceased stepfather a lot, the man was an important role model for him, but the only reason he sticks around is because his mother and brother can be fairly horrible people. He loves his sister to bits and will do anything to protect her. It’s a complicated story to unpack, but that is why you need to read the book and I won’t make any potentially spoilery comments.

Dieter on the other hand Mr tall, dark, handsome and mysterious. He feels an instant attraction to Florian, the main reason why he was in town anyway. It was because of Florian’s artwork that the Bartholomew porcelain works were honored with a very important prize. Dieter has a complicated family as well, although his are not intrusive like Florian’s. Quite simply, in finding love Dieter begins to find peace with his past as he realizes the depths of what he feels and the importance of Florian in his life. The main hurdle these guys have to deal with in the end is the fact that they live and work in two different countries on two different continents.

The narrator of the audio is Jack Wesley, a new narrator for me, as I have only heard his performance of both Tales from St Giles stories. He does a good job and lifts the story and characters so much so that I found that I enjoyed the audio of this book more than I did reading the book. I particularly liked his performance of Florian. Although he also did a pretty good job with Dieter, I felt the accent he used was a little shaky but after a bit I got used to it and let it slide.

I really adore both books in this series so far, I love the fairy-tale element. I’ve loved reading these books and listening to the audios. I sincerely hope that there are more Tales from St Giles to come in the future. 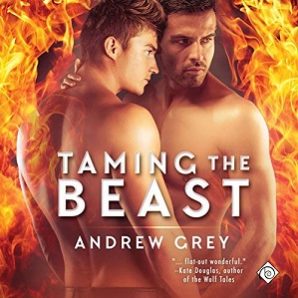 Blurb: The suspicious death of Dante Bartholomew’s wife changed him, especially in the eyes of the residents of St. Giles. They no longer see a successful businessman, only a monster they believe was involved. Dante’s horrific reputation eclipses the truth to the point that he sees no choice but to isolate himself and his heart.

The plan backfires when he meets counselor Beau Clarity and the children he works with. Beau and the kids see beyond the beastly reputation to the beautiful soul inside Dante, and Dante’s cold heart begins to thaw as they slip past his defenses. The warmth and hope Beau brings to Dante’s life help him see his entire existence—his trials and sorrows—in a brighter light.

But Dante’s secrets could rip happiness from their grasp… especially since someone isn’t above hurting those Dante has grown to love in order to bring him down.

Review: I love reading anything by Andrew Grey and will do so without taking too much notice of the blurb. I love his writing style, I always connect with it and always feel the emotions of the characters that he weaves throughout the prose.

Taming the Beast, the first book in Grey’s Tales from St Giles series, and for the most part is based partially of the classic tale of Beauty and the Beast. I love books that are either inspired by or are simply a modern MM retelling of the classic fairytales. Here, Grey only takes elements of the old tale and crafts the lives of people in an idyllic, sleepy town which is dependent on the Bartholomew family porcelain business to hire a great deal of the locals.

Dante Bartholomew takes on the “Beast” role in this story. His wife died under somewhat mysterious circumstances, which Dante refuses to talk about. Instead he chooses to live the life a recluse, though respected and liked by the people in his family’s mansion who are the only people he interacts with day to day. He doesn’t want to face the past and he tries to not let the town’s nickname, the Beast of St Giles, get to him. Dante is forced to go to an annual business dinner and from the moment he meets counsellor for the local rec centre, Beau Clarity (get it? Similar to Belle?) his life changes forever.

Beau is relatively new to town. He’s moved when he took the job as counselor to the family, especially the kids, affected by drug abuse, among other things. Beau brings a light to Dante’s life that he had thought had been long lost. Beau in some ways brings out the best in Dante and vice versa, but most importantly Beau helps the people around him see that Dante is a lot less sinister than gossip says.

This is a gentle type of romance. Dante and Beau need to go on a journey before they can properly embrace love and life together. They have a great chemistry that is enhanced by the fact that their story doesn’t have the guys tumbling in bed and declaring “I love you” when the story barely starts. The character development shows the depths of emotions these guys are capable of.

I really enjoyed the narration by Jack Wesley. I’m not overly familiar with him, but his voice and the voices he gave the characters were really well done. He conveyed the tone and emotion of the plot wonderfully. Dante especially had a significant storyline where we eventually find out what his demons are, and he slowly has to let go of his baggage. Nailing this part of the story was the most essential part for the narrator to get right in my opinion, and Wesley played it just right.

This is the type of book that would appeal to a wide audience. There is no instalove, which I know is a deal breaker to a lot of people. Equally, I know that there are a lot of people also drawn by the whole fairytale type element as well. Fans of Andrew Grey will no doubt enjoy this too, although it is somewhat different to what we normally get from Grey.

I’m actually about to start to read book 2 in this series and I’m super excited. I think I’d also love to hear the audio of book 2 as well. Really cool start to a series.