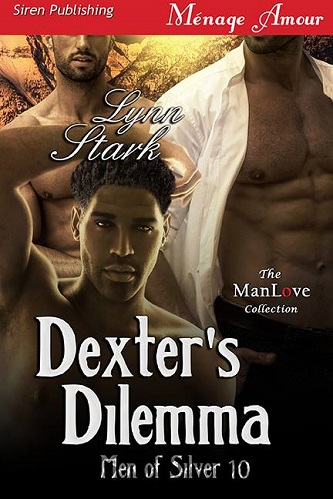 Blurb: Dexter Chan worked hard to make a good life for himself. He was single, owned a business, and had a failed relationship behind him. He rarely thought about sex. All that changed when he met two incredibly handsome and charming men who moved to Silver, after inheriting a tavern. Meeting them changed everything, including how he viewed sex and what he wanted in a relationship and whether he wanted one lover or two.

Rocco and Dante Martone fell hard and fast for Dexter Chan, when they met him by chance. The younger man was intelligent, funny, and handsome. It wasn’t long before they realized they wanted him. Unfortunately, they felt as if only one of them could have a relationship with the man. Dexter also seemed hesitant to date more than one of them. The knowledge brought on a dilemma none of them was certain could be solved.

Review: Each book in the Men of Silver collection features a new romantic couple. To enjoy the overall story arc and crossover characters, I would recommend reading the series in sequential order.

Dexter has a successful business, grooming pets. He owns his home, a plot of land by the lake, great family but the only thing he was missing was a man to come home to. The thing is, it just didn’t seem to matter with him. Then one emergency call and he finds himself the attention of twins.

Rocco and Dante have taken over their late uncle’s home and business. After find three cute kittens who had a little accident with some oil, they call in for some help. They had not expected the sexiest man to show up. And damn if they both didn’t know what to do but fall in love.

Other than my problems with the story it was an enjoyable read. I am afraid that this is not one of those books or series that will be read more than once. I will however keep my eye out for the next story.