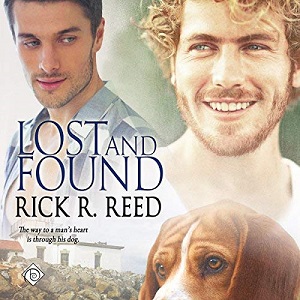 Blurb: On a bright autumn day, Flynn Marlowe lost his best friend, a beagle named Barley, while out on a hike in Seattle’s Discovery Park.
On a cold winter day, Mac Bowersox found his best friend, a lost, scared, and emaciated beagle, on the streets of Seattle.

Two men. One dog. When Flynn and Mac meet by chance in a park the next summer, there’s a problem—who does Barley really belong to? Flynn wants him back, but he can see that Mac rescued him and loves him just as much as he does. Mac wants to keep the dog, and he can imagine how heartbreaking losing him would be—but that’s just what Flynn experienced.

A “shared custody” compromise might be just the way to work things out. But will the arrangement be successful? Mac and Flynn are willing to try it—and along the way, they just might fall in love.
©2016 Rick R. Reed (P)2017 Dreamspinner Press

Review: A sweet and sexy romance! Dogs are man-magnets for sure and one sweet beagle brings Flynn and Mac together. At first Mac seems deceiving, and a bit o fa jerk, but as Flynn soon discovers, his dog-napper holds a great big heart hot enough to match his fiery red hair.

Flynn has gone through life a bit detached, not of a lot of love from his family, no big passions in life besides his beagle Barley. Until he sets his sights and his heart on Mac.
Overall this is a story about finding love in unusual places, choosing to make family from friends, and the love of four legged fur-babies.

Michael Neeb is a great narrator, giving distinct voices to each story character, and plenty of velvet to each passionate encounter.

If you love fast paced love at first sight, cute men with wounded hearts, and of course, dogs, you’ll love this sweet and sexy story by Rick R. Reed.