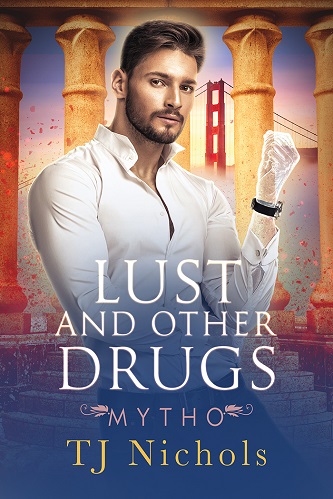 Title: Lust and Other Drugs

Blurb: Police officer Jordan and dragon shifter Edra might have to work together, but they don’t trust each other—even if sparks do fly between them.

If anyone finds out Jordan’s a mytho sympathizer, it could kill his career. No one can know that he frequents the satyr dens and uses the drug Bliss. Another satyr overdose might not get much attention, but two dead humans? That shouldn’t be possible.

Edra, Mythological Services Liaison, has been covering up mytho crimes to protect the community’s reputation. With a mayoral election looming, the last thing his people need is a scandal.

To get a murderer off the streets, Jordan and Edra will be spending a lot of time together, and it won’t be easy to keep up with their deceptions… or to keep resisting each other

Review: A scientific experiment gone awry send the earth into chaos. New inhabitants are stranded on earth because of what happened. Edra, a dragon shifter knight, is the new liaison for the SFPD. Jordan Kells is a recently promoted homicide detective with a few secrets of his own. When murders begin happen and the blame is a drug called bliss the two men begin working together to discover what is going on. The Mythos claim it’s impossible to overdose on the drug so an investigation begins.

With it being an election year the current major is no help to the Mythos as he tries to stir up trouble against them. Edra and Jordan have a fight on their hands as the news keeps up fake news regarding the murders as well as the mayors bad publicity.

I really liked these two men and their determination to find out what happened. The attraction between them is hot even though they try to deny it. It’ simply a wonderful story with many twists and turns that lead the reader deeper into the story.