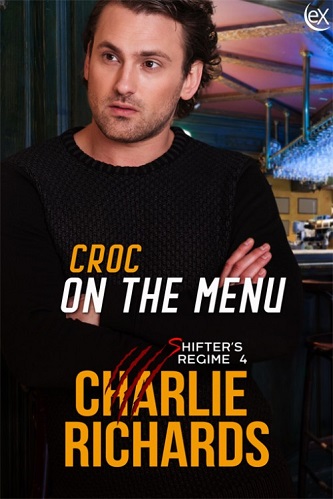 Title: Croc On The Menu

Blurb: Keeping the Peace: A shifter enforcer discovers his mate in a human whose connections make him question Fate’s plan.

As the owner of an authentic Irish pub, Sinjin Gallagher—Jin to his friends—thought he’d seen it all. That all changes when a huge bruiser of a man enters his establishment looking for one of his regulars. To Jin’s surprise, the guy isn’t there to cause trouble…but to stop it. What’s even odder is when he finds himself aroused by the man’s efficiency as he deals with that threat. As a pacifist, Jin doesn’t understand his unexpected desire.

Tideus Solverman runs across information that Councilman Goldstein would be attacked while eating at an Irish pub. As a council enforcer, it’s his duty to stop it. Even with the distraction of the hot pub owner—Jin, his mate—he gets the job done. Realizing his size and abilities intimidate Jin, Tideus still believes with a little patience and the mate-pull, he will prevail. Well, he does until a bit of information comes across his desk—it was Jin who told the rogues when the councilman would be there.

Can Tideus trust in Fate and get the answers he needs, or will he walk away and leave extracting the truth to an impartial enforcer?

Review: Jin has had the worst luck with families. His brother is a self-centred asshat who thinks he is entitled to what ever he wanted. He passed that on to his wife and children. Jin has tried to stay away from him but never really makes it far. Then one night at his restaurant someone tries to kidnap another. The sexiest man shows up and things just seem to heat up for him.

Tideus walks in to help the other enforcers and has found his mate. A mate that might just be working with the rogues and helping plan the kidnapping of one of the councilmen. However things are not what they seem.

As always a fascinating tale with some unique shifters. I love the action packed story with a bit of fun times in it. The only issues I have is that you never get the full story. I want to know what happened to his brother and family, but it always stops just when you might get some answers. Other than that it was still a good read.

I enjoyed reading this and look forward to the next story. I can guarantee that it is the type of story that will be read many times over. 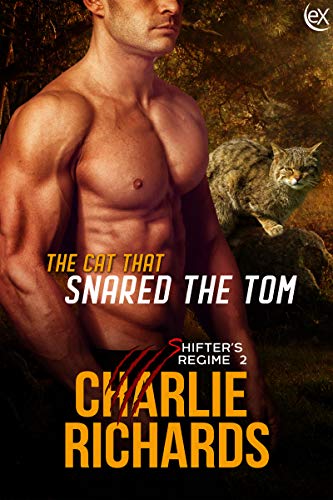 Title: The Cat that Snared the Tom

Blurb: For over a century, Lachlan Addair worked for the Shifter Council as an enforcer. When the ruling body decided to open a new investigative branch, Lachlan was the first to volunteer. Infiltrating and exploring a shifter unit without detection is right up his curious cat’s alley. When Lachlan’s duty to report the causes of strife within a lynx pride has him slipping into Councilman Goldstein’s estate undetected—just for fun, of course—Lachlan stumbles across Thad—his mate.

Unfortunately, the wild turkey shifter is standoffish and brusque. He doesn’t trust Lachlan and makes no secret that he thinks the mate-pull is nothing but a trick of the pheromones—something he’s determined to ignore. Lachlan loves a good puzzle and is undeterred. He admires Thad’s loyalty and uses his extensive wiles to cultivate a little of that for himself. When Lachlan is injured wrapping up a case, will it be the catalyst his mate uses to reject Lachlan—his job could bring so much danger to his flock, after all—and send him on his way?

Review: Each story in the Shifter Regime collection features a new romantic couple. To enjoy the overall story arc and crossover characters, I would recommend reading the series in sequential order. This particular series is branched off from several other series featuring the same crossover characters in many of the books.

Curiosity they say kills the cat, but in Lachlan’s case he would have been dead many times over. He can’t seem to let a puzzle go. He is able to sneak in to places without getting caught, that is until his mate does one night. Thad is a turkey shifter who thinks that mates is just a mythical idea and doesn’t truly believe. However it doesn’t explain why his every thought is always on the blasted cat shifter.

Charlie is one of the few author’s whose stories always keeps me entertained. I usually loose interest in stories that are just continuous and never ending, but I seem to get a kick out of these books. The story always keeps my attention and gives me everything I could want in a story. Excitement, adventure, danger and some hot sexy times are just a bit of what you will get in one of these books. I love how she gives us unique shifters that you don’t normally get in other books. I also love how protective they are of each other and their families. The only thing I do not like about these books are how they feel like it is just a drop at the end. They end at the weirdest times and drives me crazy.

Other than that issue, I always get a kick out of these stories. They are a blast to read and I can’t wait to get my hands on the next book. 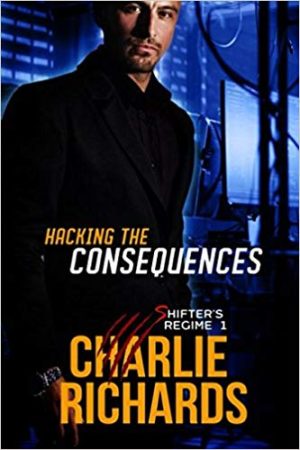 Blurb: Keeping the Peace: When a lion shifter finds a stranger hacking his systems, he discovers a kindred spirit in the most unlikely of places.

Thirty years before, Vincentius Goldstein agreed to join the council with the express intention of bringing their technology into the twenty-first century. After all, he’d had fun hacking into it. He’s done that, and now finds the almost daily meetings and constant infighting stretching his patience. Vincentius prefers the seclusion of his computer room. When he discovers someone hacking into his system, his excitement is stirred for the first time in decades.

After figuring out where the hacker is located, Vincentius sends a council investigator after him. To his shock, when the investigator returns with the hacker, a small guinea fowl shifter named Cho, Vincentius realizes the man is his mate. Even with the mate-pull, Cho fears him. After all, Vincentius had ordered Cho captured and taken away from the safety of his flock and friends.

Can Vincentius figure out how to win the favor of his captive, or will he lose the best thing to happen to him in over three hundred years?

Review: Each book in the Shifter Regime collection features a new romantic couple. To enjoy the overall story arc and crossover characters, I would recommend reading the series in sequential order. This story is actually a branch off of several other series, including Wolves of Stone Ridge, Kontra’s Menagerie and A Paranormal Love.

Cho and his fellow flyers were rescued from a lab by some pretty awesome shifters. They were different types of flyers but they were a family. He was the hacker out of the group and sometimes got in trouble. He just hadn’t expected to get kidnapped.

Vincentius was a council member and also a pretty damn good hacker himself. He had not expected to get hacked himself, and was even more shocked by the sexy little man who had hacked him. A sexy shifter who was his mate.

Cho has an innocence about him and always loves to run around naked. He is going to bring fun to this stuffy house and fun was what they needed. This story gives you action, adventure, danger and some hot sexy times. The characters are a blast to read about and just tend to make one smile. This story actually had me laughing in parts of it.

I absolutely loved this book and can’t wait to get my hands on the next book. It gave me everything I could ask for in a book and so much more. It caught my attention from the start and kept it all the way to the end.

I would definitely say this is a story that will be read more than once.