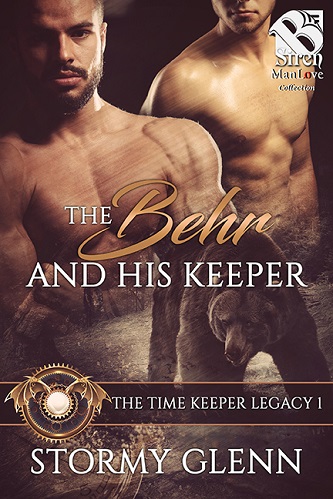 Title: The Behr and His Keeper

Blurb: As the only heir to the Harrington legacy, Tom Harrington always knew he’d have to step one day and become the man his grandmother trained him to be. He just had no idea that there was a part of his family’s legacy that he knew nothing about, nor had he been trained for. When he learns he’s the next time keeper, he accepts it as part of being a Harrington. He just wished he knew what a time keeper was.

Lord Rogan Behr had served on the shifter council for ten years, far less than the other council members. When the new time keeper arrives, he quickly realizes that the sexy man is his mate. Unfortunately, he realized it too late to stop his bear from claiming the man. Now, he has a pissed off mate with more questions than he has answers.

When threats are made, Rogan does everything he can to protect his mate, but it’s not enough. Tom and his friends are still attacked and Rogan is kidnapped. He can only hope that being a time keeper will keep his mate alive because living without Tom isn’t something he plans to do. It would help if they could figure out who is after them.

Review: Tom’s grandfather and mother had passed on leaving him with his grandmother. She was the true constant in his life. A life that had a few secrets he is soon to learn about. When she passes on, Tom is left being the Lord Harrington. A position he didn’t want but was soon to find that he couldn’t pass it on.

Rogan is a bear shifter and part of the council. Shifters were never truly meant to live in the world that Tom lives in. However when Tom’s grandfather passed on the gateway home closed. Only when Tom turned twenty-five could it be opened once more. However danger comes at them from all over.

It is quite different then any other story I have ever read before. It is quite unique but then again it is written by an amazing author. An amazing author who has managed to give her readers a world that any one would love to be in. The characters were well rounded but a bit nutty. I wished that we would have seen what happened to the evil in this story, but my imagination took over. It is a well told story that was captivating and fun. It gives you action, danger, pissed off alpha shifters, a bit of drama and some hot sexy times.

I enjoyed reading this and can’t wait to see what the next book has going on. I would definitely recommend this story. I can guarantee that this is one of those stories that will be read many times over.