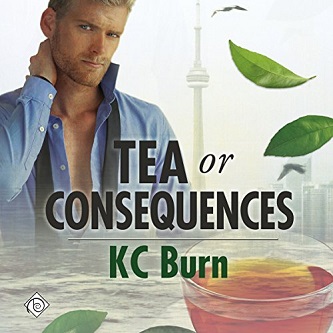 Maybe Riley isn’t living up to his full potential, but being a temp executive assistant suits him. He’s never bored at work, he’s got friends who let him geek out, and he’s got a carefully crafted twink exterior… which might be getting constrictive now that he’s on the other side of 30. Life isn’t perfect, but it’s comfortable.

Review: Tea or Consequences is a mystery/suspense/romance by KC Burn. Burn is not a new author to me and although no on my list of automatic reads, I nonetheless am usually excited to give a new book by the author once I decide that I like the look of the blurb. I think it’s Burn’s way of writing feels so accessible to the read and flows easily, add on top of that generally relatable characters I’ve read in Burn’s books so far, it usually a pretty pleasing experience.

Darcy Stark is a relatively new narrator for me, the only other book I’ve heard him narrate is another KC Burn gem. I found his narration quite enjoyable. He makes the romance both cute and hot, but also has a great voice lending to the mystery and suspense aspect of the story. I especially loved the voice that he gave Riley.

In the book, Riley works as a temp PA for company executives, he enjoys the changes in work place as he takes on the job from PA’s that go on maternity leave, annual leave, etc. He knows that this isn’t the life for everyone, and he also knows that he is capable of doing a lot more, but for now he is happy in his current career choice and has worked hard to develop a reputation that many professionals would envy. Everything changes when he finds the boss of Gautier Cosmetics, his current assignment, dead in her office on the night of one of the most important party’s of the year. Think of The Devil Wear Prada but with a touch of a tea totalling, French Lady.

With the police and investigators investigating the suspicious death comes Tadeo Martin. He’s the homicide detective in charge the investigation and also the man that Riley had crushed over in high school. Back then it was the usual case of nerd crushing on jock and the jock not seeing the guy. And although Riley recognises the detective, he says nothing. Instead he is more than happy to jump on the band wagon and do a bit of poking around himself for Tadeo. The romance is sweet and happens quite naturally, however, the major part of this story is instead the investigation. I really liked how Burn seamlessly intertwined the romance into the ongoing mystery, without sacrificing the feel of danger as the guys close in on the murder.

This is good for someone who loves a murder mystery, it has an opulent setting and two ordinary guys caught in the middle. Awesome book in all and the narration just enhanced my enjoyment of the text.