Hi guys! We have Beryll and Osiris Brackhaus stopping by today with the tour for their new release The Demon of Hagermarsh, we have an exclusive excerpt and Shorty’s review, so check out the post and enjoy! ❤ ~Pixie~ 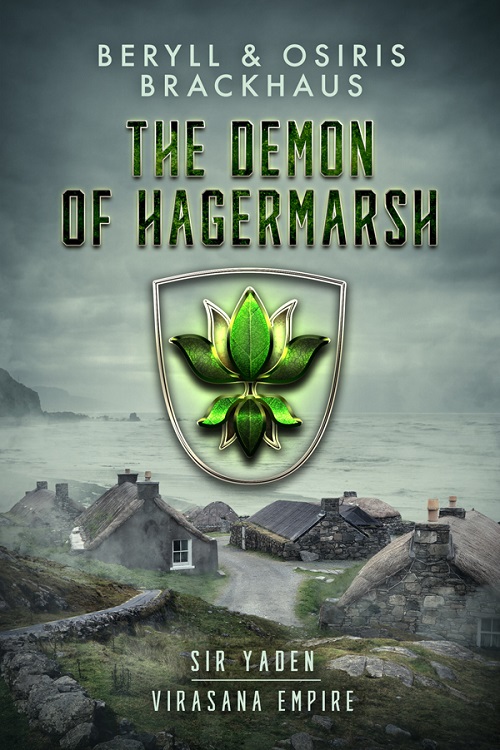 “The Emperor cares for each and every one of his subjects.”

Many consider the catchphrase of the imperial Lotus Knights to be nothing more but well-polished propaganda, but for Yaden, it is a way of life.

A young Lotus Knight himself, his first mission in service of the Emperor sends him to the remote village of Hagermarsh, a suspiciously friendly place on a planet known for its inhospitable people. But how to uncover a demonist coven when nothing bad ever happens?
Getting to know the villagers only complicates things – the motherly fishmonger surely isn’t a demonist. Nor the gruff leader of the local militia. And definitely not the cute baker from across the street.

Come discover a dazzling, hopeful universe of knights and monsters, of psions, aliens and ancient deities! The Demon of Hagermarsh is the first book of ‘Sir Yaden’, an epic SF saga of grand adventure, romance, bromance and family, set in the multi-faceted Virasana Empire. It is a romantic adventure and can be read as a standalone. The next two days were rewarding and frustrating in equal measure.

Yaden and Darios worked hard to unpack everything, set up the shop and get the house back into shape. They received another delivery of goods from Schimmelbach by the same truck and driver who had taken them to Hagermarsh and who proved just as scowly and taciturn on their second meeting.

If they had only planned to open a store, they would have counted themselves successful.

But Yaden hadn’t made any progress on his real work whatsoever. Of course he hadn’t expected to find a conjuring circle right in the middle of the town square, but some hint or lead he could follow would have been nice.

At least, Darios had left an order with one of the farmers at the market in the village square for Yaden to pick up, so he had a reason to go up there and take a good look at everything.

He found plenty of things that seemed odd. His previous observations proved as true for the walled part of the village – everything was in excellent repair and clean. He didn’t find a single beggar or even loitering youth. Everyone he met seemed to be in good health. In a village this far removed from proper medical care, he would have expected all sorts of ailments, but he didn’t see any. The church opposite the town hall was small and very ordinary, with absolutely no sign of strange cultist activity. The town hall itself was as neat as a museum and didn’t have any postings from radical political fringe groups. Which, on Leichnam, was highly improbable in itself. Even the huts of the poor quarter on the other side of Uptown looked orderly and well kept. All in all, good things, nothing out of the ordinary, nothing that couldn’t be explained by mere coincidence. But seen in sum, it was all so alarming it made his skin crawl.

When a gaggle of playing children ran past him, Yaden sighed with relief.

But no traces of what caused the demonic aura that drifted through the town as a bad smell, barely perceptible but never truly gone, either.

On his way back from Uptown to the General Store in Eastcliff, Yaden was suddenly hailed from the porch of the cobbler’s shop, loud and cheerfully. A young woman was standing there and waving at him. She was wearing the heavy leather apron of a crafter, her long, brown hair wrestled into a messy braid. And she wasn’t scowling.

“Hi, I am Bridget, journeyman cobbler, at your service.” She sat down the boot she had been working on and rose from her stool on the porch. “You’re the new assistant in the General Store, right?” She wiped down her hands while she waited for Yaden to answer.

Those were a lot of words for a local. He grunted something affirmative and waited for her to say more, but didn’t exactly walk over to her for a chat.

“Everything okay? Are you settling in?”

“Do you already know when you’re going to open again?”

It was a guess, but plans changed all the time. What did that woman want? It was clear to Yaden that she wanted something, but he was absolutely at a loss for what that could be.

“So where are you from, originally?”

Yaden could have given her a significantly more elaborate answer since MissionPrep had come up with a comprehensive background story for him, but he chose to answer in typical Leichnami brevity.

“Have you been with your master for a long time?”

She visibly chewed on that last one, obviously insecure on how to proceed. This had to be the clumsiest interrogation ever, Yaden thought with an inward smile.

“Really?” She tried a companionable smile and gesture at his bare feet, currently covered with mud. “You’re well over twenty, and he keeps you like an errand boy. But you’re not a slave, are you? We don’t have many slaves here…”

“No.” Maybe she was trying to be nice, Yaden decided. “I can’t read, Ma’am, even though Master has tried to teach me. But he keeps me around, and feeds me, and I am grateful for that. And I don’t like shoes.”

He looked down at his feet and wriggled his toes. He preferred to be in contact with the ground to properly use his powers, that was why he didn’t wear any shoes, ever, not even on Emperor’s Island on Lagoona. He never had, and the cold mud of Hagermarsh didn’t bother him. Obviously, that wasn’t something he was going to tell her.

“Fair enough,” Bridget commented with a smirk. “There’s enough people around who wear shoes, just make sure you’re not starting a new fashion.”

A joke? From a Leichnami? Yaden tried to get a reading on her, but like with everyone else, he didn’t get anything particularly demonic. Maybe their talent to mask was simply better than his talent to detect anything.

He ended up squinting at her suspiciously, which seemed an acceptable response.

“Don’t worry,” she tried to reassure him, “I am just trying to make sure your master is treating you all right. If anyone ever hurts you, you come to me. I’ll make sure they’re going to be dealt with.” She tried for another reassuring smile. “Because, you know, here in Hagermarsh, we don’t tolerate bullies.”

Yaden almost burst out with a ‘what the fuck?’. If there was one thing Leichnami didn’t tolerate, it was someone else prying into their private affairs. And what herbs you put into your soup or how you treated your assistant definitely counted as private affairs.

He replied with a firm grunt that made it clear he considered their conversation at an end, and turned towards the store. Now this had been exceedingly odd. Bridget had instantly earned herself a top spot on Yaden’s to-watch list.

He returned home and sat down at the kitchen table, munching on the last slices of Colin’s bread. It had an odd, pinkish colour inside that was unfamiliar to him, but apart from that, it tasted as delicious as it had smelled.

When Yaden had gone to the bakery the other day to return the basket, Colin hadn’t been there. Instead, there had been a tall, gangly teenage boy behind the counter, who had already perfected the Leichnami scowl-and-grunt. Colin’s apprentice, Yaden guessed, but didn’t ask. At least, he had seen Colin every morning so far, albeit briefly, when he put out his chalkboard while Yaden cleaned the front porch from the encroaching snails. And each morning, Colin had smiled at him. By now, Yaden was sure he was being flirted at, but couldn’t see any reason why the local baker should be interested in someone like him. And yet, those moments in the mornings when Colin smiled at him were quickly turning into his favourite moments of the day.

We hope you enjoyed your time in the Virasana Empire.

You can find more information about the Virasana Empire at www.virasanapedia.fandom.com 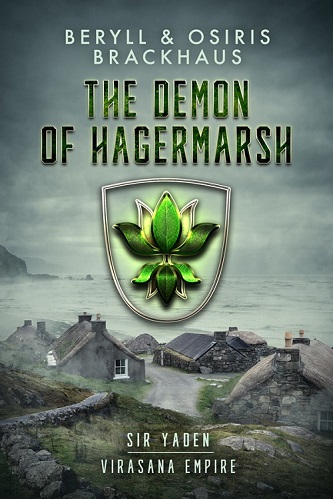 Title: The Demon of Hagermarsh

Blurb: “The Emperor cares for each and every one of his subjects.”

Many consider the catchphrase of the imperial Lotus Knights to be nothing more but well-polished propaganda, but for Yaden, it is a way of life.

A young Lotus Knight himself, his first mission in service of the Emperor sends him to the remote village of Hagermarsh, a suspiciously friendly place on a planet known for its inhospitable people. But how to uncover a demonist coven when nothing bad ever happens?
Getting to know the villagers only complicates things – the motherly fishmonger surely isn’t a demonist. Nor the gruff leader of the local militia. And definitely not the cute baker from across the street.

Come discover a dazzling, hopeful universe of knights and monsters, of psions, aliens and ancient deities! The Demon of Hagermarsh is the first book of ‘Sir Yaden’, an epic SF saga of grand adventure, romance, bromance and family, set in the multi-faceted Virasana Empire. It is a romantic adventure and can be read as a standalone.

Review: Not a lot is given about Yaden’s Lotus Knight but there are a lot of flashbacks before this happens. He is given a mission by the emperor to look for demons in a small village. The village seems friendly and quaint. Darios is his gladiator guardian who I liked a lot.

I liked most things that happen in this very long story. Unfortunately, it was a little too much on details that were unnecessary for me at times as I stopped multiple times and had to regroup myself to continue reading. A good portion of the first half of this story is this way and the good stuff starts happening at the halfway mark.

Given that this is the first book in a series many authors try to fit too much in the first book and sometimes it feels overwhelming. This was the case with this book to me. After the halfway mark things are still slow but better. I never actually got a feel for Yaden and Caleb as a couple.

The many genre’s in this book added an extra element that brought enjoyment to the story. I am looking forward to seeing what happens in the next book.

One thought on “The Demon of Hagermarsh by Beryll and Osiris Brackhaus Blog Tour, Exclusive Excerpt & Review!”