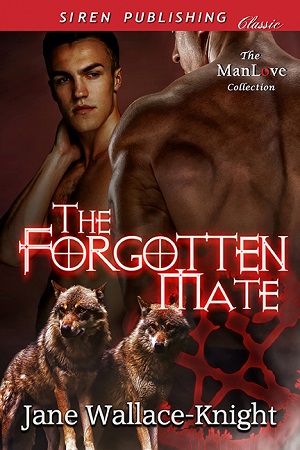 Blurb: Rowan Adams awakens surrounded by werewolves, with no memory of who he is. The man in front of him, Devon Carter, is the alpha of the pack and, according to him, Rowan’s mate.

Born into a coven of witches that behave more like a cult, Rowan took his sister and ran. They’d been running for years before they stumbled into Devon’s territory. Somehow, Rowan managed to convince the alpha to take him as his mate, knowing that his skills as a witch would benefit the pack, and that having a small army of werewolves to protect him and his sister was a pretty good deal.

The plan was going well until something went wrong with the mating ritual, leaving Rowan with no idea who he was, or what the hell was going on.

With the coven closing in, and trouble with another pack, Rowan barely has time to adjust to his crazy life, or to the man he’s apparently married.

Review: Rowan and his sister are from a coven that is not somewhere one would chose to be. The coven had old views and one of them was the females were subs and mated off to who ever the leaders wanted. Rowan did not want that for his sister. So they did the one thing they could do, they ran. They ran right into a wolf pack.

Rowan had talked the alpha into mating with him. It would strengthen the pack and protect them all. The one thing they need since the coven was coming for them and a pack was on the odd side of them. To bad Rowan didn’t remember a thing about it.

Magic always seems to come back to bite one in the ass, but in this case it might just help them out a bit. Now with this story I hate to admit that it comes off a bit stiff and it is hard to connect with the characters. It doesn’t really flow like it should have, but is still enjoyable to read. I can’t say that it is one of those stories that would be read more than once, but time will tell. I will also admit that it did manage to keep my attention while I was reading it. So that was a plus in my book.

It was a enjoyable read and I would definitely check out the rest of this author’s work out. I would recommend it.