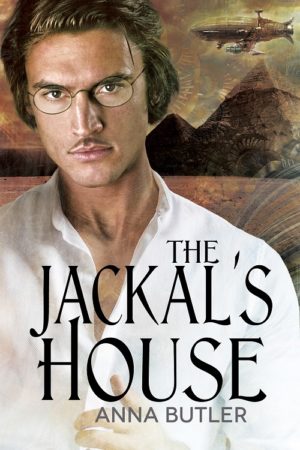 Blurb: Something is stalking the Aegyptian night and endangering the archaeologists excavating the mysterious temple ruins in Abydos. But is it a vengeful ancient spirit or a very modern conspiracy….

Trouble finds them in Abydos. Rafe and Ned begin to wonder if they’re facing opposition to the Temple of Seti being disturbed. What begins as tricks and pranks escalates to attacks and death, while the figure of the Dog—the jackal-headed god, Anubis, ruler of death—casts a long shadow over the desert sands. Destruction follows in his wake as he returns to reclaim his place in Abydos. Can Rafe and Ned stand against both the god and House plots when the life of Ned’s son is on the line?

Review: The beginning of this story wraps up things left unanswered in the first book and is somewhat slow. Afterwards we find Ned is going to Aegypt for his archaeological dig. Rafe is less than thrilled and even Harry, Ned’s son, is somewhat displeased.

Once at the site things become strange and start picking up. There were many twists and turns that added a mysterious element to the story. While some I figured out others surprised me. I truly like the characters in this story as they seem well blended and rounded.

My only gripe with the series is that is seems slow at times to the point where I would like to stop reading for a while. I liked both books but this one is better paced than the first one.

All in all a great read and continuation of the series.