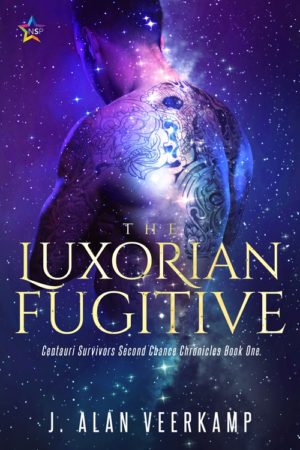 Blurb: Trying to escape his tortured past, Sergeant Liam Jacks travels aboard the transport vessel, the Santa Claus, as the security chief alongside his best friend and captain, Marc Danverse. Having survived the Civil War, they shuttle amongst the Proxima Centauri planetary cluster, trying to find some modicum of peace. Something of which Liam is in short supply.

During a stopover on the planet Luxoria, they take on a mysterious passenger. Hadrian Jamison’s history is questionable and his effect on Liam is undeniable. The more they learn, the more questions they have. As they are drawn together, Hadrian’s presence threatens to disrupt the quiet.

When Hadrian’s past catches up to claim him, the ensuing conflict is more than any of them expected..

Review: Loved this story of Hadrian and Liam. Captain Danverse and Liam have been friends and lovers for a while but the physical aspect is a coping mechanism for Liam to deal with their last mission. He suffers from nightmares and guilt at what he had done. Hadrian is genetically modified person. He’s strong, fast and has other abilities. He is labled as a slave to the one who owns him.
Escaping with help and getting aboard the Santa Claus was the only thing Hadrian focused on but meeting Liam he felt a connection that he couldn’t ignore. But when danger comes knocking it tests all of them.

I loved this story. The first half of the book is drama based where we get background on some characters and are introduced to Mac, the tech guy who is secretly in love with captain and vice versa. So there are plenty relationships throughout the story.

My favorite part was learning about Hadrian and all that entails. I was saddened by what he had gone through and how that came to be. I was incensed at the person who owned him. Hadrian never should have gone through what he had at the whim of someone in power.

An amazing detailed suspense and romance filled story with action scenes that leave you awed. I loved everything about this story and am looking forward to reading the next book in the series.