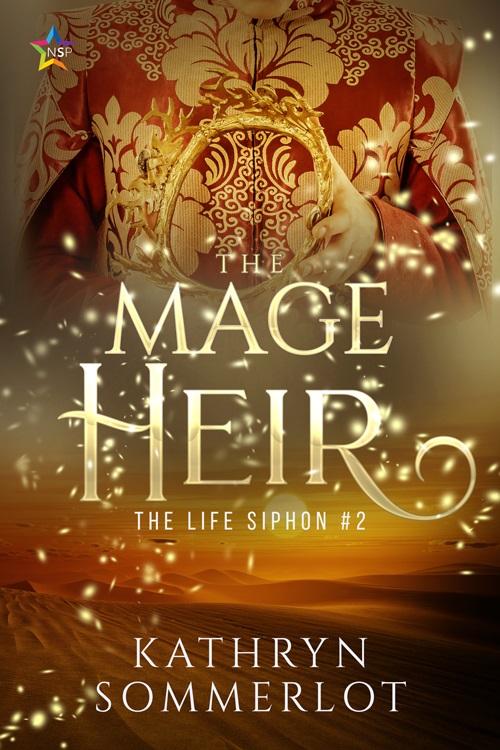 Tatsu woke with such a start he couldn’t breathe.

Heart hammering, he spun up and onto one knee, grabbing his bow and notching the arrow before his thoughts had completely righted. He waited for one breath, and then another, poised and ready to release the arrow into the shadows of the trees. Everything around them loomed threatening, and the pulsing dread shouldn’t have been a surprise—they were fugitives, after all.

His throat closed, pulsing along with his heartbeat. When nothing jumped out from the darkness, at least the idea of the soft sounds belonging to one of the queen’s guards faded. No one had come to drag them both to the prison cells in Aughwor.

“Alesh?” Tatsu said, voice low, and was met with only silence. The low murmuring wasn’t Alesh and Ral either, and knowing they’d stayed in Dradela eased Tatsu’s mind a bit, though his stomach clenched at the thought of the queen guessing their involvement in Yudai’s escape.

With their camp set up in a small clearing, the mountains stood half a day’s walk away, close enough to feel the threat from both Chayd and Runon still breathing down their necks. If the queen hadn’t sent guards after them, then Runon certainly had. The last thing Tatsu wanted was to underestimate Nota—no, his mother, no matter how difficult placing the designation on her was. Underestimating mages had landed them into the whole mess in the first place.

Whatever stirred within the brush faded away—a small rodent foraging across the forest floor, perhaps—and Tatsu dropped his arms back to his sides. He focused on returning his heartbeat to normal rhythms.

He was jumping at shadows, and at such a rate, he’d exhaust himself long before they could hide themselves in the mountain peaks. Willing his body to relax, he settled onto his sleeping roll as the branches overhead waved gently in the night breeze. There was nothing strange about the trees, but Tatsu kept imagining he could hear them sing.

After traveling through so much of the drained land and its twisted aftermath, nature didn’t hold the same comfort it used to.

From his vantage point beneath the tree cover, the moon remained obscured behind branches brimming thick with leaves, but Tatsu guessed half the night had passed, giving them three or four hours before the sun rose. Yudai, sleeping several paces away near the fire pit, was curled into a tight ball on his leather bedroll. Occasionally, he would murmur and turn over, but none of the sounds seemed to be enough to wake him. Small favors, if nothing else.

Tatsu closed his eyes, but unbidden, his mind pulled up a scene he’d spent weeks trying to bury: Zakio’s body crumpled in the crimson-stained snow. He pressed the heels of his palms against his eyes hard enough to leave red spots dancing in his vision after he pulled both hands away, but the image persisted even as he resumed staring out at the trees. When he let his head fall against the trunk of the nearest tree, his hair caught in the rough bark.

At some point, he managed to nod off, still in his uncomfortable sprawl against one of the wider trees, and by the time he woke again, the sky had begun to streak with color. Leaning forward, he winced at the pain the movement elicited in his stiff neck. He was preoccupied enough with the tightness to only vaguely notice Yudai stirring across the fire, but the anguished yell a second later startled any residual sleepiness out of him. A split second of spinning showed they were still alone in the clearing.

The relief, if one could call it that, flashed in an achingly short moment.

Yudai sat up with both hands raised in the air, head jerking from side to side. Around him, stretched out like a too-bold shadow, his own sleeping outline had burned brown into the withered grass. The drained blades bent and curled over on themselves, even the ones that weren’t crushed beneath Yudai’s weight. In only a single night, life had been bled dry by Yudai’s wild, uncontrollable magic.

Yudai glowered up at him, eyes glinting with vulnerability.

“No,” he said, and that single word reverberated through Tatsu’s limbs until he feared he could no longer stand. His chest heaved, a pang of copper blood on the back of his tongue.

The life siphon had endured. Kathryn Sommerlot is a coffee addict and craft beer enthusiast with a detailed zombie apocalypse plan. Originally from the cornfields of the American Midwest, she got her master’s degree and moved across the ocean to become a high school teacher in Japan. When she isn’t wrangling teenage brains into critical thinking, she spends her time writing, crocheting, and hiking with her husband. She enjoys LGBTQ fiction, but she is particularly interested in genre fiction that just happens to have LGBTQ protagonists. Find out more on her Website. Twitter