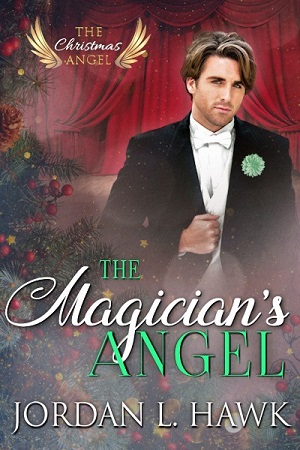 Blurb: Vaudeville stage magician Christopher Fiend lives for the spotlight. His chance at big time stardom awaits him in Chicago, the next stop on the circuit after the little town of Twelfth Junction.

Edward Smith wants nothing to do with his family’s theater. Until Christopher catches his eye on opening night, then treats him to a very special performance during intermission.

When a dead body turns up in the middle of Christopher’s act, suspicion immediately falls on him. If Christopher and Edward can’t work together to clear his name, Christopher won’t make it to Chicago in time. Edward knows he shouldn’t get attached to a man who will be gone in two days, but his heart—and a very special angel—have other ideas.

The Christmas Angel series of holiday romances follow the travels of an angel ornament through the decades as she inspires (and sometimes nudges) lonely men to find their Happily Ever After.

Review: In a time where being gay could become deadly, two men fall in love. A wooden angel has given Christopher the best of luck. Now she was leading him to love, however first they must find out who killed one of the others in the show.

Edward loved and hated his father. His father was the one who led the production and his mother was an actress. She took off when him and his brother were very young. He hated show business but his borhter loved it. However when a sexy magician catches his eye, things do heat up. Then the body of one of the entertainers shows up in his man’s act, well they need to get to the bottom of this.

Not bad for the time period. I do need to pay attention to what books are given to me though. I do not really get into them but I will say that it was entertaining. However other than the angel, I didn’t see much about Christmas in this story. It was more focused on their love and the murder. It was told with a even pace, but the story felt very rushed to me. Or should I say to much added in that could have been better off turning it into a larger story.