Hi guys! We have Sandrine Tomas popping in today with her debut novel The Music of Love, we have a great excerpt and a brilliant giveaway, so check out the post and enter the giveaway! ❤ ~Pixie~ 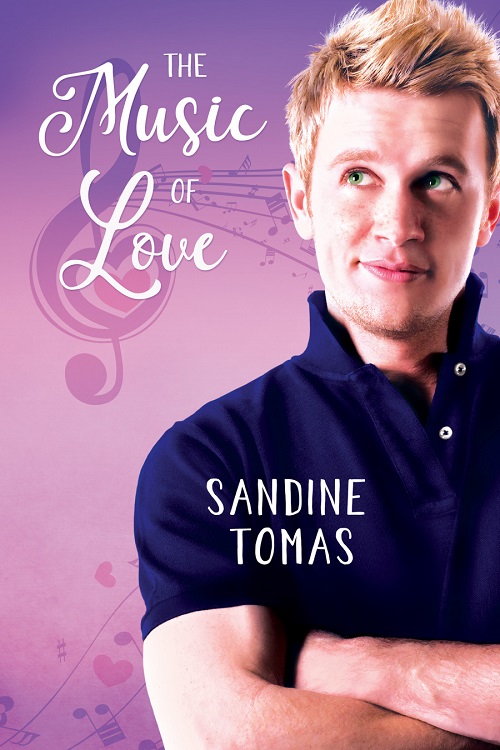 The Music of Love

Sometimes the music of love skips a beat….

Paralegal by day, musician by night, Julian has an expiration date stamped on his forehead when it comes to love. No relationship has made it past a year, so Julian avoids romance like the plague and concentrates on his music instead.

Which works fine until gorgeous, smart, and funny Zachary joins Julian’s firm. One look at the man and Julian knows he’s dangerous. No matter what, he can’t fall for Zachary. He has to spare Zachary the pain of dumping Julian at the one-year mark. His brilliant plan? Ask a straight friend to pose as his significant other to keep Zachary away. Not surprisingly, his scheme does little to dampen the attraction—on either side.

When Zachary gives Julian a second chance despite his deception, Julian thinks his curse might be broken. But then he’s faced with the impossible choice between a life with Zachary and living his dream of touring with the band….

JULIAN DOWNED three aspirin on the way into the shower. The second the water touched his discombobulated body, he started to feel slightly less amphibian. By the time he’d finished lathering and rinsing his hair, he’d worked up the evolutionary scale all the way to small mammal.

He remembered tequila. And his best friend, Gabe, vaguely. Nick had been there as well. They’d been playing music. Shit. He really hoped he hadn’t gotten vomit on his guitar. He might have to off himself if he did that and then hide the body because he’d be too ashamed to let anyone attend the funeral.

It took two scrubbings, but eventually whatever had plastered to his skin peeled off. He brushed his teeth again because it seemed like a good idea. Mouthwash came next, and after swishing his tongue around his mouth and sensing only minty coolness, he arrived back to nearly human on the food chain—if you didn’t count the electric drill in his skull. An improvement from jackhammer, but still a pretty effective reminder of his idiocy.

Slipping on sweats and an old but mercifully clean T-shirt, he eyed his disheveled bed with revulsion. It was rank, with regurgitated bits of yesterday’s meal making his stomach heave dangerously. Thankfully, the blanket seemed uncontaminated, and he shoved it to the floor. He pulled off the sheets and scrunched them up tight. Holding the bundle up by the tips of his fingers, he threw his clothes from last night into the pile. Weren’t worth washing. Too gross. He popped into the kitchen for a garbage bag, tied the mess up, then dumped everything into the garbage can outside.

Donning thick plastic gloves, Julian got down to work, quickly wiping down the bathroom with his favorite homemade cleaning mixture of water and vinegar, then tackled the few speckles of brown on his white grout with an old toothbrush despite his having gone over it the day before during his weekly Saturday bathroom scouring. You couldn’t keep it gleaming without concerted effort.

The doorbell rang, and Julian stopped halfway through fluffing the pillows on his newly made bed.

Now what? Sundays were made for newspapers and coffee. Which he hadn’t even had a chance to make yet!

Oh shit, he’d forgotten—Zachary stood holding another box of legal files upon which he balanced a large paper bag and two cardboard cups. A curious head tilt met Julian’s openmouthed stare. He was struggling to form a coherent sentence when his nose took over.

Grin widening, Zachary replied, “Guess you could still use some, eh?” He walked in, put the file box on the kitchen counter next to its twin, then held out a lidded coffee cup. “Didn’t know how you took it—got creamers and sugar in the bag.”

Zachary did the slow glance thing again. “You clean up good.”

Julian’s face warmed. If his brain was totally operational, he might think that was a flirt.

Coffee. It would all make sense postcaffeination. A long, slow sip later he heard some sort of moaning noise coming out of him. Didn’t care. Fuck, he needed this.

Two more swallows later, he looked up as Zachary pulled his own cup away from his mouth, smirk in place. “Don’t think I ever pleased anyone as much without touching them.” Then as if realizing what he’d said, Zachary looked down bashfully.

Okay. That was definitely a flirt, albeit a little awkward. His nose started twitching again. Now that his own stench wasn’t in the way, he realized the living room smelled good, like coffee and… whatever scent Zachary was wearing. Alarm bells rang because Julian definitely should not be noticing Zachary’s scent. He shook his head in a manner he hoped didn’t look like a dog coming out of the rain and uttered, “I, um, more files?”

“They finally sent the email records. Brian wants us to categorize, sort, and give him anything pertinent.”

“Five years’ worth?” Julian asked, not quite comprehending Zachary’s perkiness at this request.

“Yeah. I was hoping you could help me bring up the rest. Now that you seem able to stand, that is.” A twitch lifted Zachary’s cheek.

Julian nodded but then noticed the bag Zachary had placed on the counter, and it stole his thoughts away from emails. Was it from his favorite bakery? Zachary saw where he was staring.

“I didn’t know what you liked, so I bought one of each.” He held the bag open for Julian to peer inside.

Wow. The sweet smell of still warm muffins assaulted him, and his mouth watered. He caught Zachary looking at him. The light had shifted in the room, and Zachary’s eyes appeared darker now yet still a soft shade. Teddy-bear brown. Okay, Julian was officially losing it. Lingering hangover insanity. What else could explain this? Stop staring, he told himself.

Except it appeared his words weren’t as silent as Julian had imagined. “I’m sorry,” Zachary said earnestly.

“I didn’t mean—” He yanked open a cupboard, pulled out some paper plates for the muffins, and handed one to Zachary. Nabbing an oversized cranberry muffin for himself, he plopped onto the sofa, normal decorum abandoned on account of yesterday’s tequila insanity. Zachary followed hesitantly, perched as primly as his large stature allowed.

Julian took a bite, remembering to swallow before speaking. “I’m sorry, dude. I’m not running on all cylinders yet today. You weren’t staring. I’m sorry.”

“It’s okay.” Zachary laughed, but it sounded uncharacteristically nervous. Which was nuts because he didn’t know Zachary and couldn’t possibly know what characteristic meant for him. “I tend to do that sometimes. You’re not the only one to tell me to stop it.”

“You stare at people?”

Julian sensed embarrassment. There wasn’t anything to say to that. “Thanks for breakfast,” he blurted, finally remembering his manners. “What do I owe you?”

“Nothing. It’s on me. You can get it next time.” With the change in subject, the dimples reappeared. “So, how long have you been with Harrison, Kim, and Fowler?”

“Almost a year. Work’s tedious, but the pay is steady. Was a great gig till they assigned me to the Peterson case. Brian’s the youngest person ever to become senior partner. Guy’s a machine. Never stops.”

Zachary chuckled. “Yeah, I hear you. But I love his enthusiasm. All the folks I’ve met so far, for that matter, are just so dedicated. ’S what makes them good, y’know?”

“I prefer their enthusiasm Monday through Friday and not Sunday morning.” He stopped and turned a puzzled glance toward Zachary, something about the way he’d slurred “you know” making his heart ache in familiarity. “Texas?”

“Mine’s still in Texas too, man. I couldn’t hear it in you. Usually I can. How long have you been in DC?”

“Long story. Not even a funny story. Just long. How about yourself?”

“I’m boring compared to you. I lived at home, and now I live here.”

“What brought you here?”

Whoa. Top school. Dude must be crazy smart. Well, it explained his snappy attitude over having to work on a Sunday. Great, now aside from overzealous Brian and the rest of the partners, Julian would have to deal with this huge, overgrown puppy getting high over a bunch of stupid emails. Couldn’t he have been paired up with a schlub just doing a job like himself?

“What? No. That’s great. It’s a great school. Good—good for you.” Dammit, was he always this fucking transparent with everyone? No wonder his only friends were semi-alcoholics.

“Is it the legal profession in general, then, that you have issue with?”

“No. Lawyers are great, make this town run and keep me fed. Can’t complain.”

A soft spring breeze ruffled the curtains, and the shadows painted a pinkish swatch across the apartment’s white walls. The sunlight filtering into the room turned Zachary’s eyes golden. It was neat how they matched his complexion now.

Zachary pulled his hair back with a quick swipe. Nervous habit, maybe. Or he could have felt warm. It was getting hotter. The gesture was futile, as Zachary’s long bangs just fell forward again and framed his angular cheekbones. He had a really nice face.

“We should go get the rest of the boxes.”

The words broke through Julian’s fog. Christ. He’d been staring. Ogling. This wasn’t… no way. The last fucking thing he needed was to fall for someone. Nononono.

The accompanying headshake clearly gave Julian away because Zachary asked innocently, “You don’t want to get them now?”

He was so screwed. Sandine Tomas grew up an unapologetic bookworm, making friends with characters from the ancient past to the farthest reaches of the universe. Her career as a marketing writer has given her insight into the divergence between what a person thinks they want and what they truly need. Relationships are at the heart of her writing, and she enjoys creating characters who become so real that their stories beg to be told. Writing allows her to explore people and ideas from all sides, spinning a notion around like a gem until its facets glisten.

Twisting the old adage about writing what you know into writing what you feel, Sandine doesn’t shy away from raw emotions, turbulent circumstances, and above all, deep passions, fueled by humor, honesty, and trust. She enjoys instilling her characters with the flaws, courage, and idiosyncrasies that brings them to life.

Sandine lives in New York with her husband, two daughters and a Golden Retriever puppy named Noodle. An unabashed TV and film enthusiast, she happily binge watches her favorites until her eyes glaze over. Her other guilty pleasures include attending fandom conventions, sleeping in on weekends, and recharging solo by holing up with a caramel macchiato and an amazing book. Win an Ebook of The Music Of Love!