Hi guys, we have Sydney Blackburn & Lina Langley popping in today with their new release The Power of Love, we have a have excerpt and a fantastic $10 NineStar GC giveaway, so check out the post and enter the giveaway! ❤ ~Pixie~ 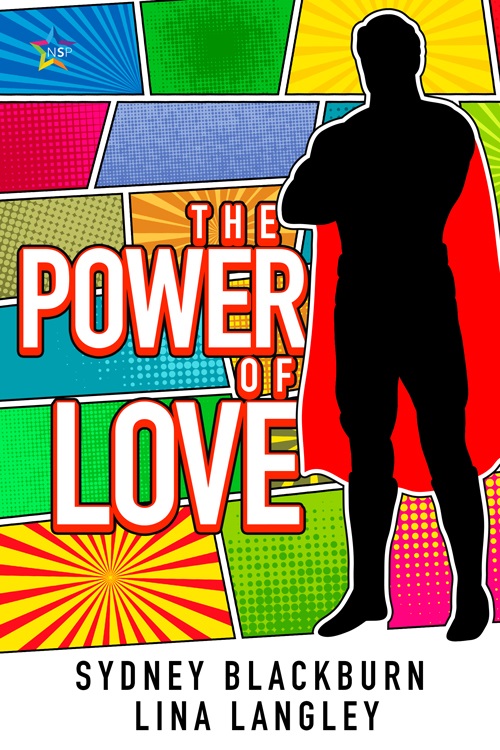 The Power of Love

Or their powers, which is the only thing saving Vince’s life—he’s the son of a notorious supervillain. But the secret could become a deadly deception when he falls into a super-powered entanglement with gorgeously heroic cabinmate Locke.

When their instructor disappears, Vince’s father may be to blame. Torn between loyalties, Vince’s greatest fear is that his father’s taint will corrupt him and poison his heart against Locke.

Vince might be doomed to follow in his father’s footsteps, but he hopes love can beat genetics.

The Power of Love, Lina Langley and Sydney Blackburn © 2018, All Rights Reserved

Vincent Silva breathed a sigh of relief when he saw his grade posted on the bulletin board. He’d already passed the entrance exams to be at Camp Hologram, but the on-site test was vital.

He didn’t recognize the names of the three other guys in Cabin One, but he never expected he would. Kids with power-gifted parents were raised to protect their identities, for everyone’s safety. He didn’t want anyone to know who his father and stepmother were. Especially his stepmother, though he hated to use that word. It went the other way as well—he used his mother’s maiden name on his application so his father and alleged stepmother wouldn’t know he was at the camp.

A sharp lack of noise brought his attention to a classroom that reminded him too much of high school—being lectured by Mister Mister, who used to be somebody. His power was mimicry—for a few hours he could have the power of any gifted person he touched. Five years ago, he’d run afoul of the villain Chameleon. Vince wasn’t sure exactly what had happened—the media reported only that somehow his stepmother had managed to defeat Mister Mister, after which he’d retired from active duty.

The resemblance to high school ended with Mister Mister, who didn’t look anything like a teacher. For a start, his gray hair, still thick and wavy, was shoulder length, and he wore an olive drab T-shirt the same color as his canvas pants. He had tattoos down his arms and over the backs of his hands. He was also more physically fit than any of Vince’s high school teachers had ever been.

“Welcome to Camp Hologram, gentlemen. You wouldn’t be here if you hadn’t mastered a general control over your powers, so the focus of your training will be learning independence and teamwork. How to maximize your strengths, minimize your weaknesses. How to survive without any powers at all.

“It takes strength of will, and discipline….”

Vince tuned out the boring “why you’re all here” speech. He knew why he was there. He was born with powers and a determination to never be the kind of person his father was. Being the son of a villain didn’t mean that was his only choice.

“Weekend leave is in the city of Guilford, but don’t get too excited. There’s a volunteer element to your grades. I believe most of you have ignored the pamphlet of rules you received before arriving so let me reiterate: booze, drugs, and gambling are not permitted here at Camp Hologram. Lights out is at 10:00 p.m. Reveille is at 5:00 a.m. sharp. You are expected to make up your bunks and keep your gear in your lockers. This afternoon you’re to stow your gear and get to know your cabin mates. When you hear the klaxon, get to the mess hall or go hungry. Now grab your packs and go to your assigned cabin.”

Finally! Vince leaned down to grab his duffle, a heavy canvas bag almost as long as he was tall and stuffed with everything he owned. Whatever he did at Camp Hologram, fail or graduate qualified to be an official hero, he wasn’t going back home. Guilt made him flinch as he thought of his mother. She deserved a chance to make a life without his father screwing it up, and that meant a place with immaculate security. The kind only money could buy. Money popular heroes earned through sponsorships and licensing fees.

The first step was to ace his training.

He listened to the other guys grumble as they shuffled out, most of them with much less luggage.

“This is so lame,” someone said.

“Piece of cake,” someone else said.

Vince didn’t say anything. He followed the others out of the administration building. It was a large complex, holding the showers, the shitters, the kitchen, and the dining hall, along with the lecture room and who knew what else. Stuff the trainees didn’t need to know. Might be in the paperwork Mister Mister rightly guessed he hadn’t read. She grew up in Colombia and currently lives in Gainesville, FL with her husband. One thought on “The Power of Love by Sydney Blackburn & Lina Langley Release Blast, Excerpt & Giveaway!”