Hi guys, we have Rick R. Reed popping in today with his new release The Secrets We Keep, we have a great excerpt and a brilliant giveaway so check out the post and enter the giveaway! ❤️ ~Pixie~ 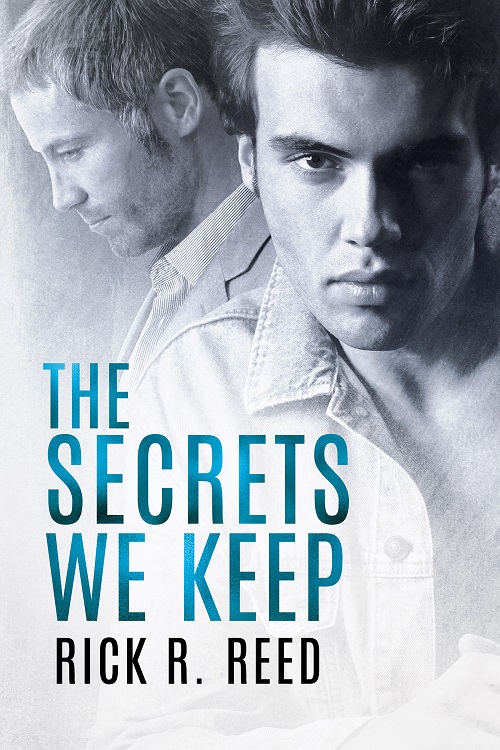 The Secrets We Keep

Jasper Warren is a happy-go-lucky young man in spite of the tragedy that’s marred his life. He’s on a road to nowhere with his roommate, Lacy, whom he adores, and a dead-end retail job in Chicago.

And then everything changes in a single night. Though Jasper doesn’t know it, his road is going somewhere after all. This time when tragedy strikes, it brings with it Lacy’s older, wealthy, sexy uncle Rob. Despite the heart-wrenching circumstances, an immediate connection forms between the two men.

But the secrets between them test their attraction. Will their revelations destroy the bloom of new love… or encourage it to grow?

It’s always exciting for me, both as a writer and as a reader, when the two main lovers in a book first meet. In THE SECRETS WE KEEP, that first meeting is at a funeral home wake, for someone both men loved deeply (and for whom many of the secrets in the book are kept).

When he stepped out of the bathroom, someone was waiting for him. An older man.

Jasper tried to thread his way around the guy. “Did you want to go in?” Jasper gestured toward the open bathroom.

“No. I was waiting for you.” The guy eyed him. He was probably a good twenty years older than Jasper, but as inappropriate as it was at a time like this, Jasper couldn’t help noticing how sexy he was. Trim, a little on the short side, it was obvious, even in his impeccably tailored black suit, he was in very good, and very powerful, shape. Jasper was certain those weren’t shoulder pads testing the seams at the tops of his arms.

He had kind eyes. And they were the most amazing shade of pale gray. Jasper had seen a husky once with eyes like that; he couldn’t say he’d ever seen anything like it on a human being. Those eyes were mesmerizing, arresting, and chilling, framed in long, black lashes.

His hair was silver, shorn close on the sides with a bit more on top, spiked with some gel.

He wore a fashionable five-o’clock shadow that Jasper couldn’t deny he wanted to feel—either with his fingers or against his own smooth cheeks.

He simply smiled enigmatically. “Probably not. But I bet I know you. You’re Jasper, Heather’s roommate, right?”

Jasper gripped the warm hand, slightly soft and a little damp. He didn’t take his eyes off Robert the whole time, and the “whole time” was much longer than the duration of a handshake for most guys. It sent a shiver through Jasper.

“Burroughs?” Jasper had a terrifying thought. What if this is her dad? Good Lord, I’m flirting with Lacy’s dad! At her funeral! The very thought caused beads of sweat to pop out on Jasper’s forehead. He held in a giddy burst of laughter. “Are you, um, related to Lacy? Er, Heather?”

“I’m her uncle Rob. Did she never mention me?”

Jasper wracked his brain. One thing neither of them did much of was talk about their respective families. They liked to believe they were each other’s family now, “chosen family” was the term they used. The idea, the memory of this, brought a lump to Jasper’s throat, bringing home for real that his best friend was gone. “I’m not sure.”

“It’s okay if she didn’t. I hadn’t seen her in quite some time. My schedule doesn’t afford me much opportunity to see family, as much as I might want to.” He smiled, and Jasper noticed the sadness around his eyes despite it. Robert went on softly, “I wish I’d had one more chance to talk to her, to tell her how I loved her. I’m afraid she didn’t know.”

Jasper nodded. “Me too. If I could just talk to her one more time, maybe we wouldn’t be here.”

Robert cocked his head. “No?”

Jasper didn’t want to disabuse him of the notion that Lacy had not killed herself, if that was what he was choosing to believe. So he simply said, “Who knows?”

“Heather used to write sometimes, a long time ago. She’d shoot me a text, you know, a birthday emoji or a holiday one. We were close when she was a kid. I used to take her places with me whenever I could. Her parents never really got her, you know?”

“They were always trying to change her. Like, she was left-handed naturally, and they worked and worked and worked on getting her to use her right. They tried to get her to hang out with what they deemed the popular girls. They bought her American Girl dolls when all she wanted was a set of paints and a good book, preferably horror. I could stand here all day and tell you how little my brother and sister-in-law knew their girl. But I won’t.

“I just wish I’d stayed in better touch with her. Once my career took off, back when she was just becoming a teenybopper, I kind of got preoccupied and we lost touch.” He paused and Jasper noticed the tears standing in his incredible eyes. Unexpectedly, he laughed. “When she was a little girl, and I mean like three or four, she would sigh and say, ‘Woe is me.’ What little girl says that?”

“That’s how she referred to herself. She was even thinking of legally changing her name. She hated Heather.”

Robert nodded. “I get that. I never thought of her as a Heather. I’m glad she found something else.” He glanced over his shoulder into the viewing room. “I wish they’d respected that.”

I do too. Jasper felt, suddenly, even sadder. For his own loss, sure, but more for Lacy’s loss. The rest of her life. She could have done so much. She could have been happy. He just knew it.

He placed his hand on Robert’s shoulder. “Look, I intended to stay longer, but I need to get out of here. This place is too oppressive. And it honestly feels like someone else is being waked, not the girl I know. So I’m gonna book. But it was nice to talk to you.”

Robert nodded. “Will you be at the funeral tomorrow morning?”

The funeral was set for one of Rogers Park’s Catholic churches. Then they’d fly the body back to California for burial in the family plot.

It was all wrong. All not what Lacy would have chosen.

Jasper shook his head. “No. I don’t think so. This isn’t her. I think I’ll just remember her as I knew her.”

Jasper turned away, feeling on the verge of tears. He didn’t want to cry in front of Lacy’s uncle—or anyone else gathered at the funeral home, for that matter.

As he reached the door, Robert’s voice stopped him.

“Would you mind if I came with you? I need to get out of here too.” Rick R. Reed draws inspiration from the lives of gay men to craft stories that quicken the heartbeat, engage emotions, and keep the pages turning. Although he dabbles in horror, dark suspense, and comedy, his attention always returns to the power of love. He’s the award-winning and bestselling author of more than fifty works of published fiction and is forever at work on yet another book. Lambda Literary has called him: “A writer that doesn’t disappoint…” You can find him at www.rickrreed.com or www.rickrreedreality.blogspot.com. Rick lives in Palm Springs, CA with his beloved husband and their fierce Chihuahua/Shiba Inu mix.