Hi guys! We have A. Nybo stopping by today with their upcoming release The Shaman of Kupa Piti we have a great excerpt so check out the post and enjoy! ❤️ ~Pixie~ 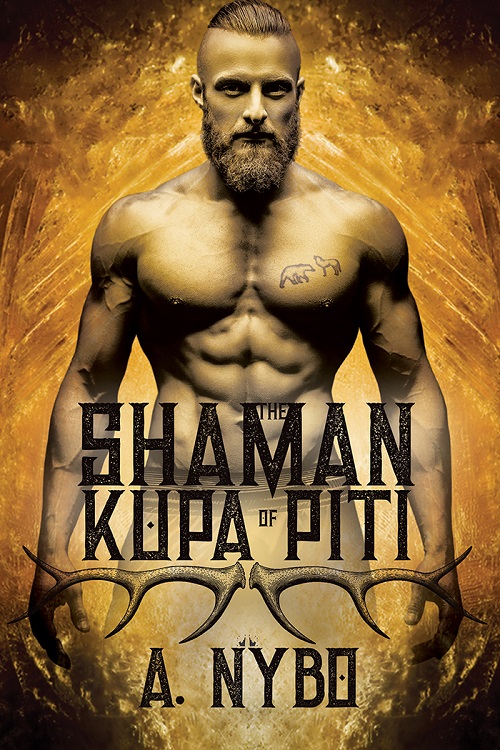 The Shaman of Kupa Piti

When an international case involving a series of ritual murders lands in his lap, strait-laced and logical Agent Leon Armstrong is going to need some help.

Leon follows the trail to the opal-mining town of Coober Pedy, Australia, where he gets tangled up with the wild Russian mystic Sergei Menshikov. Despite his commitment to rationality, Leon discovers he isn’t immune to the way of the spirits, no matter how much he’d like to think so. When Sergei tells him he treads a predestined path, Leon’s world turns upside down.

Leon’s experiences in Coober Pedy will change his life forever, but can he hold out against Sergei and the spirits—who Sergei claims have chosen them for each other?

“SERGEI, ARE you down there?” Although voices tended to echo along the mineshaft, the walls had a peculiar dampening effect, rendering it difficult to identify the speaker.

“Come on down,” Sergei invited. It was hot in the horizontal drive he’d excavated at the bottom of the shaft, but it was a hell of a lot hotter up on the surface. No wonder so much of the Australian fauna burrowed—animals were often more sensible than people; they weren’t silly enough to curtail learning from others for fear of appearing stupid.

“Do you need anything brought down?” came the voice.

Sergei continued shovelling the mullock into the wheelbarrow at the end of the drive while he waited for his visitor to climb down the ladder.

Sergei left off his labours and turned to see the Serb who worked the opal claim next to his. He raised his goggles to the top of his head and pulled his dust mask down. “Miro, what can I do for you?”

Orange dust flecked the curly grey hairs that spread from beneath a dark blue wife beater onto Miro’s stocky shoulders like shoots of new grass.

“Do you have any spare wedges?” Miro leaned with his hand against the wall, a sign he was up for a chat.

Sergei didn’t mind passing the time. Those who chose to run a one-man mine feared neither hard work nor solitude as the hours could be long and company scant. The opportunity to have a yarn now and then was welcome, but Miro habitually frustrated him. He had the ability to talk all around a story, omitting the central thread until no one knew what the hell he was waffling about—and he took his time doing it.

Usually the only time anyone had to be anywhere in a hurry around here was when a trip into town was required before the supply store closed—or to leave the opal field before dark. With over 250,000 mine entrances, the choice of a shaft to fall down was only exceeded locally by the number of bush flies. And choosing a mineshaft after sunset was so much easier—some would say inevitable.

Things happened in their own time out here, and Sergei had mostly fallen into step with that time, but Miro took it to the extreme.

“Maybe I have wedges in my ute,” said Sergei. Unless, of course, they’d bumped their way out of the ute’s open tray. The corrugations along the track approaching the claim were getting so bad Sergei often wondered if his teeth would be shaken loose by the time he’d arrived. Maybe he should invest in a canopy to ensure his tools didn’t escape into the wilds.

Resigning himself to a chat, Sergei walked to the bottom of the shaft where the twenty-litre water bottle and tin cups sat. He grunted as he sat with his back against the sandstone wall and gestured for Miro to sit opposite. Sergei rinsed the dust from the cups before filling them. He reached to meet Miro’s outstretched hand and passed him the cup.

Miro leaned against the wall and took a drink. “Did you hear about the golf?”

Sergei shook his head. “Haven’t spoken to anyone since Saturday.” He paused. “What is today?”

Miro stared at the wall to the left of Sergei as he considered the question. “Tuesday. I think.”

Most weeks revolved around happy hour, so the further from Friday they were, the harder it was to remember which day they were in.

“Who won the golf?” asked Sergei, getting them back on track. Miro was bad enough—he didn’t need Sergei’s assistance to create tangents.

“We don’t know. There was a fight over the body.”

Irritation nipped at Sergei’s temper, already primed from their last conversation, but he reined it in, reminding himself that Miro wasn’t a bad sort and any encounter might be the spirits testing Sergei’s patience for the good of his soul. “What body?”

Sergei raised an eyebrow. “What sort of body?”

“There was a dead person on the golf course?”

Miro chuckled. “Goose isn’t that good a player. His ball rarely stays on the course.”

Aware his nostrils were flaring, Sergei consciously eased his breathing. “A dead body near the course, then?”

People went missing on occasion, presumably down mineshafts, never to be seen again, but it was unusual for a body to be found.

“Yes.” Miro chuckled. “Cheating bastard refused to play the ball. Bluey told him he could drop the ball a foot from the hole, but Goose refused to stick his hand in there to get the ball.”

Sergei refrained from grinding his teeth. “The body was in a hole?”

“Yeah. At the eighth. Goose reckoned the police would probably need to take crime-scene photos, so he wasn’t going to move anything. And because we’d already lost all our spare balls by then, a fight broke out about who was going to get the ball out of the hole, but no one would. I said he could use my ball, but he refused to take the penalty.”

“How did the person die?”

Sergei waited for him to continue, but it seemed Miro wanted every bit of information dragged from him. “Why think it might be a crime scene, then?”

“The hole had tent pegs on both sides, and it looked like kangaroo skin or something had been stretched between them, but the body had been attacked by animals. It was very ugly. Looked like its stomach had exploded.”

Had Miro had some experience with bodies destroyed by explosives? He was old enough to have fought in the Bosnian war.

“The eyes had been pecked out, and the face had been torn open,” said Miro.

“Maybe it was originally a native ritual? Before the animals got to it.” It was only a suggestion, although from what Sergei knew of local native traditions, they usually opted for burial or cremation, not open holes and kangaroo skins.

“The body was a white man,” Miro assured him.

Sergei had dozens of questions but decided not to ask Miro, unless he wanted to still be talking at dusk.

He stood and stretched. “I’ll see if I’ve got some spare wedges in the ute.” A. Nybo has tried conventional methods (a psych degree and a GC in Forensic Mental Health) but far prefers the less conventional, such as the occasional barbecue in the rain, four-hundred-kilometre drives at 1:00 a.m. for chocolate, and multiple emergency naps in any given twenty-four-hour period.

Western Australian born, she has been spotted on the other side of the planet several times—usually by mosquitoes. She’s also discovered Amazonian mosquitoes love her just as much as they do in her home state.