Hi guys! We have Warren Rochelle stopping by today with the tour for his new release The Werewolf and His Boy, we have a great interview of Warren interviewing himself, a great excerpt and a brilliant $25 Amazon GC giveaway so check out the post and enter the giveaway! ❤️ ~Pixie~ p.s. keep an eye out for Shorty’s review coming soon! 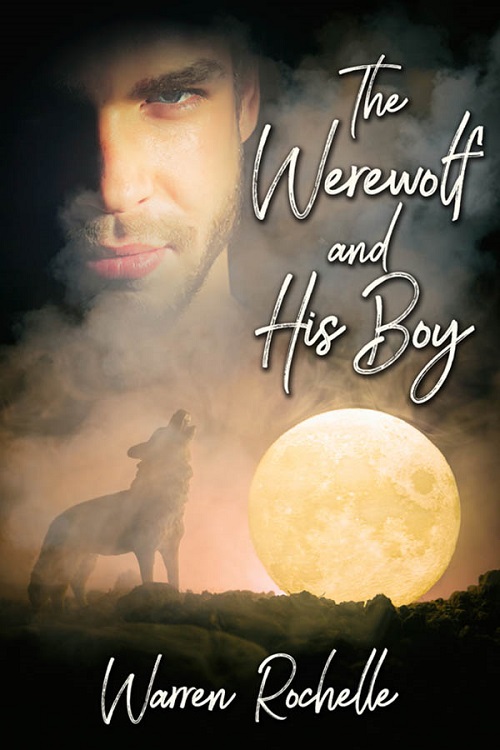 The Werewolf and His Boy

Their leap of faith could unleash magic—or plunge them into darkness.

Henry Thorn has worked at Larkin’s since graduating high school. He likes it—especially when he can use his secret skill of hiding inside shadows so his boss can’t find them. Without that talent, he would never had survived growing up different.

When a hire enters the store, Henry’s other latent talent kicks in. He can smell an emotional response even before he lays eyes on the redhead.

Jamey Currey came out, and his conservative parents promptly kicked him out. He, too, is different—he senses Henry’s attraction the moment they met. The first time they kiss, torrential rains fall from skies split by lightning.

Their kiss also awakens the Watchers, diabolical hunters who will stop at nothing—even extermination—to keep magic suppressed. With the help of a friendly coven of friendly witches, the boys embark on a quest to discover an ancient key to restoring magic to the world, and to understand mysteries of their own hearts.

The question is, will this quest cost them their lives? 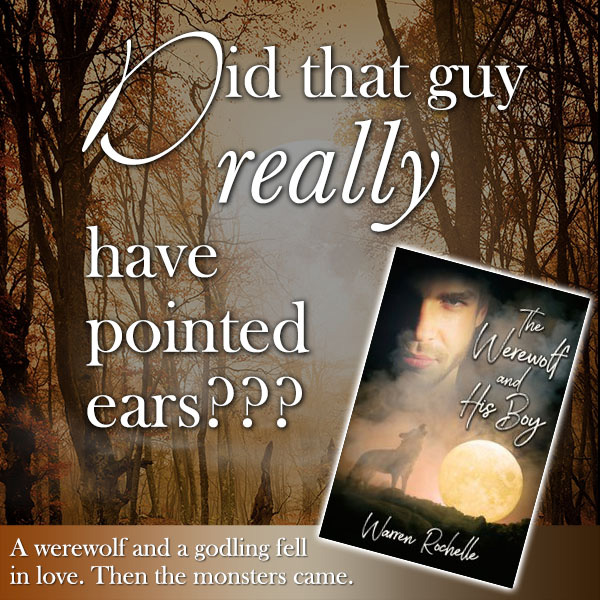 Do I have any strange writing habits or superstitions? I don’t think so, but I do have to know where a story is going to end before I can start: the beach, the White City, together…

What fantasy realm would I choose to live in and why? The first realm that comes to mind is Narnia, which is the first fantasy realm that I fell I love with. Why? So I can talk to intelligent, sapient animals and walk in a Narnian forest on a cool, green morning and be greeted by robins and rabbits and hedgehogs and flighty squirrels. To learn about the stars from a centaur, talk with the tree- and water-folk, and maybe, just maybe, talk to Aslan Himself.

Star Trek or Star Wars, and why? Damn.  Do I have to choose? Star Wars is a grand space opera on a vast scale, with swash-buckling deeds of derring-do, and heroes who are easy to love. The original movie, after all, is a retelling of the Hero’s Journey. Star Trek, however, would be my first choice, Why?  It is one my first loves and when it is at its best, it makes me think in ways far more profound that Star Wars has ever done. Star Trek has as a grand scale as Star Wars, and yes, both have back story and history, but Star Trek’s history, for me, is more believable and feels true.. Its characters, I believe, have greater depths and are more flawed, and thus, more human, or if alien, more of a real person.

Right now, I am working on what feels like two novellas. One is the continuation of “The Boy on McGee Street” (forthcoming in my collection, The Wicked Stepbrother and Other Stories, and first published in Queer Fish 2, Pink Narcissus Press, 2012). I wanted to know what happened to Fletcher and Sam next. The other novella is a sequel to my first novel, The Wild Boy, and takes place one hundred years later, as humanity recovering from the Long Nightmare of the Lindauzi conquest. When can you expect these novellas?  Next year, I hope. I also want to revisit a novel I have rewritten a few times, The Golden Boy, set in alternate history, in the world of the Columbian Empire. 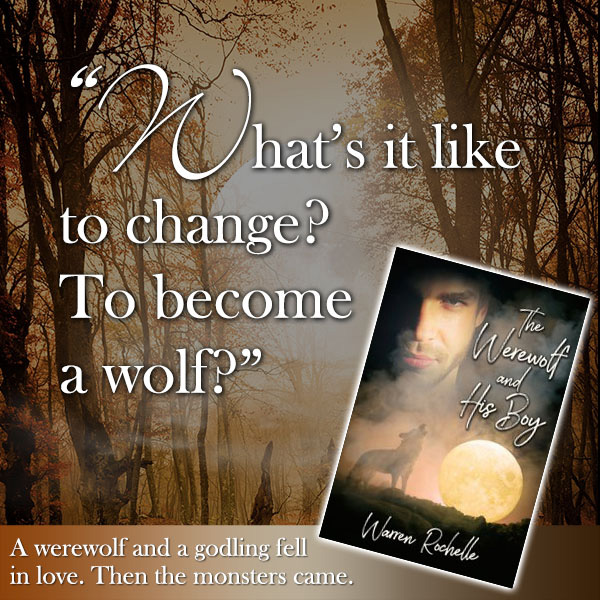 Dr. Melloy grabbed a long, carved oaken staff from a corner and stood very still for a moment. “My books, almost all my books, are in this house, and some of these are my mother’s, my grandmother’s,” she whispered, clearly in pain. “Let’s go,” she said, sighing heavily as she threw the heavy zipped bag over her shoulder and ran for the door. Henry hugged his duffel and blanket to his chest and ran after her. He wanted to tell her thank you, thank you, for saving him and Jamey, and that she was one of the coolest — no, the coolest person he had ever met. She had been so nice to him ever since he had moved in and he wasn’t sure he really knew why. I’ll thank her. When things calm down I will definitely thank her.

Up the stairs, down the hall, in and out of pools of light from this lamp, the other, the overhead, the front door, and down and Jamey stood holding onto the car door.

No stars. No moon. Shadows, winged, darker and blacker than any shadows around them. The lead one keened, high and sharp.

“Watchers,” Dr. Melloy said. Behind the creatures were the beginnings of a storm. Lightning snapped and forked, striking the professor’s house and setting the roof ablaze. Fire came down the roof, down the gutter pipes, the brick wall, over the windows, into the bushes growing against the house and into the pine-straw-covered yard that crackled, snapped, into flame.

“Jamey, Henry, get behind me, now,” Dr. Melloy shouted as the Watchers hovered just above the thicket of cedars that screened the house from the street. They screeched and keened, throwing themselves against some invisible wall between them and the witch and the two naked boys.

Jamey hooked one arm around Henry’s neck, and then he hopped as Henry half-carried him to stand behind the witch. Thunder, loud, close. Lighting struck the house again. Muttering, Dr. Melloy thrust her staff upward and light poured out of it as she threw out a fine, gauzy, sparkling net that spread out and over and above them, shimmering against the darkness. Something shattered, and grey and white chunks of dying light fell into the cedars and the gravel and hard earth of the driveway.

“Dammit! They broke the first ring of wards!” Dr. Melloy yelled over what now seemed like constant thunder and the roar of the fire. The wind tore at the flames, throwing bits and pieces into the air and the now-burning cedars. Flames and heat pushed against the net that glowed between them and the burning house and yard and trees.

“What are we going to do? Henry? Where’d he go?” Jamey yelled back, then stopped. Henry squeezed the arm around his neck with one hand, Jamey’s waist with the other. Henry seemed to be flickering in and out of sight, the way he had done in Larkin’s. Jamey could see the flames through Henry.

Henry looked at his hands, his feet: they were invisible. He shuddered, flickered on and off. “We wait just a few minutes more — oh, werewolves do that — camouflage, on and off. Henry, try to calm down.”

“Wait?” Henry said, his voice trembling. He could feel and smell Jamey’s fear and his own fear. Calm down?

“There are two more rings of wards and this shield-net, and all three have to be breached for those Watchers to get to us. We just have to hold on for a few more minutes. If only the moon were full,” she added. “I’d have a lot more power to draw on. Can’t be helped.”

Something shattered. Chunks of light, this time, gold, fell again. A third shattering followed right behind the second, green chunks of light. Thunder. Lightning. Wind, bits of fire in the air, fire engulfing the house, the trees.

“Get right behind me. Get close.”

The Watchers were right on the other side of the shield-net. They pushed, keened, ripped. The shield quivered. Bits fell.

A siren, another, and then another. The Watchers screamed.

“The fire department can stop these things?” Henry asked as he helped Jamey get as close to her as they could, their bodies bumping against hers.

“Watchers fear disclosure more than anything. Nothing attracts attention like a fire truck. And it looks like everybody in the neighborhood is out in the street. They could ignore the first few, but not this mob.”

More thunder. The sirens were getting closer. The heat of the burning house and trees pressed against the shield-net. Sweat dripped down Henry’s face, his back. His eyes burned from the salt, even as he tried to wipe it away with his free hand. With his other hand he held on tight to Jamey. Henry could feel Jamey’s sweat on his bare skin; he knew if he licked Jamey’s skin, he would taste salt. The Watchers charged against the net, and ripped, their claws caught in its shimmer and sparkle, frantic to beat the coming fire trucks.

“Get in the car. They’re almost here.”

Henry shoved Jamey into the backseat and crawled in after him and jerked the door closed. Dr. Melloy threw out one last layer of net, this time over the car, and slammed her door closed just as the sirens slowed down. Heavy tires crunched on gravel. He heard water hit fire as one truck started with the burning trees. With the Watchers screaming in the air above them, Dr. Melloy stepped on the gas, barreled down the driveway, hung a left onto Three Chopt, and drove through the crowd. Then she really floored it. 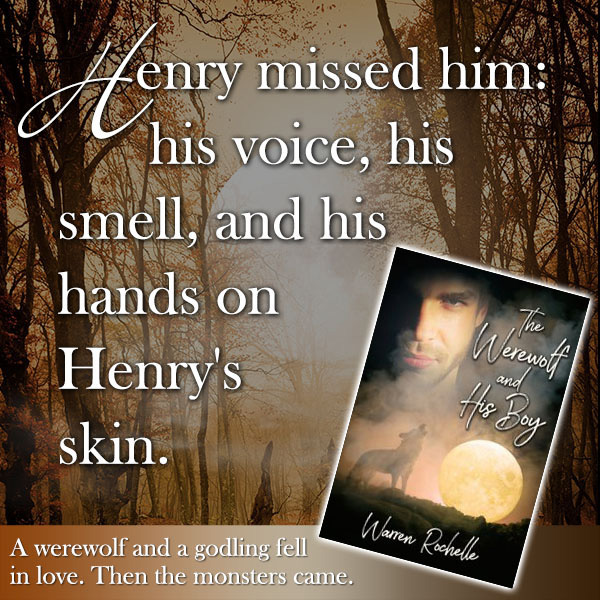 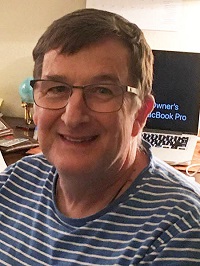 Warren Rochelle lives in Charlottesville, Virginia, and has just retired from teaching English at the University of Mary Washington.

His short story, “The Golden Boy,” was a finalist for the 2004 Spectrum Award for Short Fiction. His short story “Mirrors,” was just published in Under A Green Rose, a queering romance anthology, from Cuil Press. “The Latest Thing,” a flash fiction story, is in the Queer Sci Fi anthology, Innovation.

Rochelle is also the author of four novels: The Wild Boy (2001), Harvest of Changelings (2007), and The Called (2010), all published by Golden Gryphon Press, and The Werewolf and His Boy, published by Samhain Publishing in September 2016. The Werewolf and His Boy was re-released from JMS Books in August 2020. The Wicked Stepbrother and Other Stories is forthcoming from JMS Books in late September 2020. 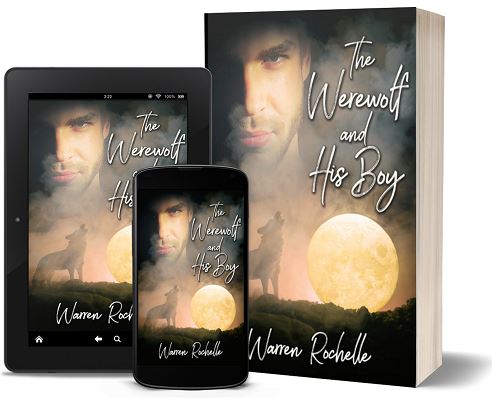 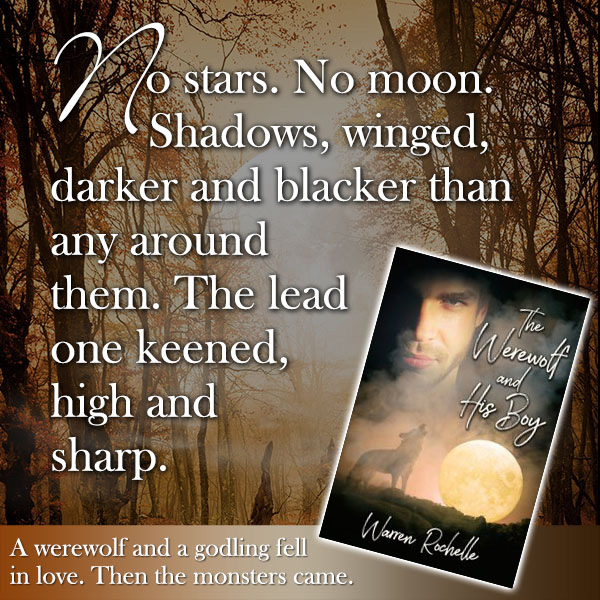