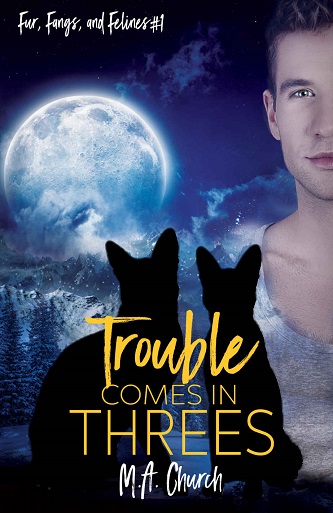 Blurb: A snowstorm in the South—on New Year’s Eve—is a perfect recipe for a catastrophe. After two soul-crushing bad breaks, Kirk’s waiting for disaster number three to strike when, naturally, two stray cats arrive on his doorstep during the storm and decide to make themselves at home. Tenderhearted Kirk lets them stay even though there’s something decidedly odd about his overly friendly felines.

Out of the punishing weather and full of tuna, Dolf and Tal are happy to be snug in Kirk’s house. But then their human goes outside for firewood and suffers a nasty fall that leaves him unconscious. Now the two cats have no choice but to reveal themselves.

**Second Edition, Previously Published**
This book has been previously published. The cover has changed, but the title, author, and story content have not changed from the first version originally published in 2014. If you have that version in your library, please do not purchase again.

Review: Dolf and Tal both cat shifters meet their mate Kirk, a human in a hardware store. From there it’s getting permission from the alpha and elders to Dolf and Tal staying with Kirk in their shifter forms until they can introduce themselves. When Kirk gets hurt that speeds up the process of introductions.

After getting to know each other better they move Kirk into their house. But not everyone is happy with a human in their midst and someone attacks Kirk and Dolf at different times. The mystery deepens until Dolf and his clowder get involved with tracking down the suspect. After a harrowing encounter the culprit is revealed.

I really loved the plot of this story it was sweet and tender yet had it’s hilarious moments as well as hair raising scenes. It was wonderfully written and well balanced all around.

One thought on “Trouble Comes in Threes by M.A. Church (2nd edition)”