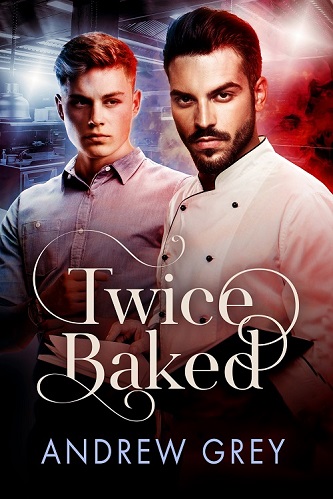 Blurb: When the pickiest eater in America is tapped to judge a cooking competition along with his chef ex-boyfriend, will it be a recipe for a second chance… or disaster?

Luke Walker’s humor about foods he can’t stand made him an internet celebrity and his blog, The Pickiest Eater in America, a huge hit. He plans to bring that same lighthearted comedy to the show—but he won’t be the only host.

Meyer Thibodeaux might be a famous chef, but he’s solemn, uptight, and closeted. He’s also Luke’s ex. As different as they are, the sparks between Luke and Meyer never really went out, and as they work together, each begins to see the other in a new light, and the passion between them reignites, hot as ever. But secrets, gossip, and rumors on the set could sour their reunion.

Review: Twice Baked is a standalone novel by Andrew Grey. I love Andrew Grey, I’ve never encountered a book of his I didn’t dislike or couldn’t finish. For me, the winning appeal is always the writing style and the three-dimensional characters who almost always develop along the way and learn a thing or two. This is actually the second book of Grey’s I’ve read recently where he has done something different to what I’ve become used to, but it still has all the hallmarks of a sweet Andrew Grey romance in my mind.

The main characters are Luke Walker and Meyer Thibodeaux.

Luke’s opinions on food is almost like everyone’s inner child – there is always some texture that is just so gross it makes you dry reach, or there is something that is said to be so amazing but taste like week-old dirty socks. Luke has a great sense of humour and because of that he has been able to make a name for himself with his blog, declaring him the Pickiest Eater in America. He is unashamedly himself and he has made it work for him. So much so, when a cooking competition, not that dissimilar to Masterchef, needs a new judge he is approached. He and the producers of the show are of the same mind – they want to inject humour along with his natural personality which makes the show more accessible to those intimidated by high cuisine. The only problem is that his ex, Meyer, is also a judge and while he has never had closure over the ending of that relationship, Luke is ready to go in and be an adult when it comes to be in the same room, let alone the same TV show, as his ex-boyfriend.

Meyer doesn’t take Luke’s reappearance in his life quite so easily. Again, Luke is his ex and that comes with a natural uneasiness, no matter how things ended between them. But he has major concerns that Luke will make a mockery of show that he had helped create by being a judge. Meyer is a celebrity chef and the back story is that he essentially left Luke behind to pursue his career.

However, the sparks are still there between them. The passion between them is felt through the words. Luke and Meyer, at first, don’t appear to have changed much from when they had last known each other, but being together in the same world again brings them together. And they do indeed realise that things have changed for them, they eventually realise that they have grown as people, and they continue to grow through the course of this book.

Luke and Meyer’s biggest problems stem from a lack of communication when they had first been together. Their current obstacle is to now balance their personal lives and professional life as famous TV judges. Now that they are nursing the spark of romance, which is now fragile, they learn to trust each other when things on set start to go wrong. There is intrigue on set and it’s easiest for them to be honest – to each other, and as much as possible, the world.

This a great second chance romance novel, I think anyone who likes that would not be disappointed. Added to that those that love cooking reality TV shows and like a bit of heat in the kitchen will probably also enjoy this one. There is loads of charm and romance.