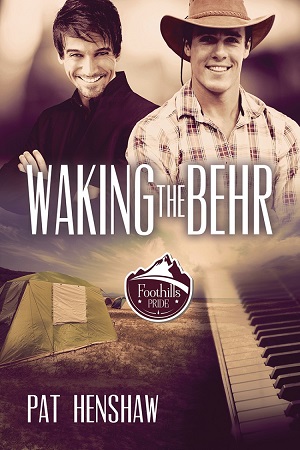 Blurb: Both Ben and Mitch think they know exactly what they want. Turns out, they don’t even know their own hearts.

Good old boy Ben has dated women his entire life, while gay nightclub owner Mitch has never considered unsophisticated country boys his type. But after they start hanging out, the small-town contractor and the urban entrepreneur are both stunned by the electricity sparking between them.
As they step outside their comfort zones to spend time together, Mitch finds he enjoys rural car rallies, and Ben is intrigued by the upscale bars Mitch owns in San Francisco. When they share their lives and grow closer, they start to question the way they’ve always defined themselves. Then they kiss and fling open the door to love. Now they must step up and travel the road that may lead to happily ever after—even if that path isn’t one they ever expected to walk.

Review: Waking the Behr is the seventh book in Pat Henshaw’s Foothills Pride series. I have absolutely loved this series – I love the writing, the plot lines and most importantly the characters. Waking the Behr is no exception. However, I have to say I’ve come to the point in the series where I find that I need to reread some (if not all) previous installments so that I can remember the overlapping characters and storylines. Some of the twinks from previous books are very flamboyant and get into trouble as though they were teenagers (with their overprotective other halves ready to jump in and protect their men). I need to keep all of these guys in order in my mind.

Back in the world of Foothills Pride again we get to meet another member of the Behr family, who just so happens to get a bit of an awakening when he is attracted to another man after a lifetime of women. Ben Behr is also another Behr who is part of Behr Construction – the building firm which features throughout the series as the go to local builders.

When Ben meets Mitch, Ben is in for the biggest surprise of his life. He isn’t homophobic or scared of being gay or in the closet, but Ben has always dated women. But Ben realizes immediately that there is more to his connection with Mitch than simply being mates. (Since I’ve read a lot of paranormal books recently I feel I need to quality that I mean mates as in friends).

Mitch is the owner of a successful gay bars in San Francisco, he’s making an appearance in the Foothills because he wants to open a new bar and needs a building contractor to do up his new space. Mitch is also surprised about his attraction to Ben – not in the same way Ben is, of course, because Ben is smoking hot. Mitch is willing to let Ben take things slowly because let’s face it, this is gay for you and if Mitch had been a arsehole about Ben struggling with his feelings then I would not have liked Mitch at all.

As I said, this is a gay for you type of story. If you’ve read the previous books of the Foothills Pride series, you’ll know what type of story to expect. This is a really sweet book. The characters have sizzling hot attraction and I love how they both develop as I got to know them. I feel that I really got to know them and that of course made it so easy to relate to the guys.