Hi guys! We have Sara Dobie Bauer popping in today with her new release We Still Live, we have a great excerpt and a brilliant $10 NineStar GC giveaway so check out the post and enter the giveaway! ❤️ ~Pixie~ 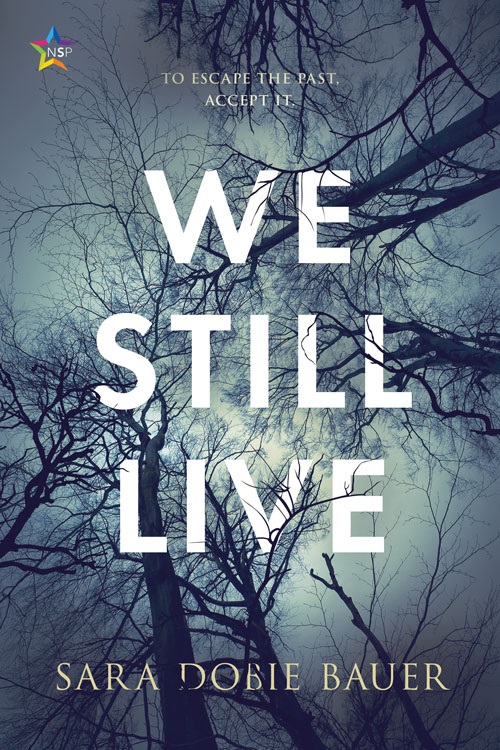 Running from a scandal that ruined his life, Isaac Twain accepts a teaching position at Hambden University where, three months prior, Professor John Conlon stopped a campus nightmare by stepping in front of an active shooter.

When John and Isaac become faculty advisors for the school’s literary magazine, their professional relationship evolves. Despite the strict code of conduct forbidding faculty fraternization, they delve into a secret affair—until Simon arrives.

Isaac’s violent ex threatens not only their careers, but also John’s life. His PTSD triggered, John must come to terms with that bloody day on College Green while Isaac must accept the heartbreak his secrets have wrought.

Dr. Isaac Twain stood in a cozy house surrounded by strangers, where a forced jubilation floated like stale smoke. The house was something out of the Shire, a hobbit home for humans, on a hilltop in Lothos, Ohio, overlooking Hambden University’s campus.

Isaac had been dragged around the party earlier and introduced. The head of the English Department called him an “emergency hire.” Emergency because two of their professors had resigned a week before the semester started when they realized they couldn’t come back, not after what happened.

The unfamiliar faces of his new coworkers floated in and out of Isaac’s attention. In the overwarm, crowded kitchen, two older ladies smiled up at him and tried asking about his work, his life—did he have a wife?—but he ducked their questions like a soldier ducks bullets. For a time, he hovered among them with his glass of wine until a delightfully disorganized bookshelf in a room off the main foyer caught his eye, and he took solace.

Stepping inside, he cast a glance over what had to be someone’s office. An antique oak desk anchored the space, though its surface was bare and dusty from nonuse. A couple of framed band posters decorated the walls, but the only name Isaac recognized was Freddie Mercury. Trying not to snoop, he turned his attention back to the initial object of interest.

Books of all shapes and sizes crammed into the shelves at odd angles. Half were alphabetized, as if their owner had once considered organization and admitted defeat. In the top right corner sat a bobblehead, some kind of rodent with a red W on its chest. Isaac bopped the critter on the head, and it nodded in response.

An author named John Conlon dominated an entire half shelf. Isaac grabbed a book with bright binding—young adult, if the cover was anything to go by. He set his glass of wine on the nearby table, empty but for a photograph of a smiling couple with dark hair (whoever lived here was apparently not a fan of clutter) and flipped pages. He read the first line—It wasn’t meant to happen that summer, but by then, Declan understood the things he meant and the things he did were often at odds—until a stranger arrived at his side.

Isaac looked up to find an overgrown frat boy with spiked blond hair and a square-shaped head staring back at him. “Maybe,” Isaac said. He lifted his chin toward the kitchen. “It’s claustrophobic in there.”

The man shrugged. “What can I say? We’re overbearing, given the right amount of alcohol.” He extended his hand. “I’m Tommy Dewars.”

Isaac slid the Conlon book back where it belonged and accepted Tommy’s greeting. “Isaac Twain.”

“We’re playing the name game later. See if you remember everybody. If you mess up, you’re fired.”

He squinted up at Isaac. “Not to be weird, but English professors aren’t usually seven feet of solid muscle.”

Isaac almost choked on his drink. Granted, people often commented on his height and physique, but Tommy’s remark still caught him off guard. “I used to run marathons,” he said. “But I’m a geek on the inside. Promise.” When Tommy smiled, Isaac tipped his head toward the dusty desk. “This your place?”

“Mine? No, God, no. I live in a shithole closer to campus. This is John’s place. He’s driving back from Wisconsin today, but he should be here soon. How long have you been in town? Heard you moved up from North Carolina?”

“South Carolina. Charleston.” He finished half the glass of wine in one go. “I’ve only been here a couple days.”

Tommy’s wrinkled plaid button-down untucked from his jeans when he scratched his belly, and he sipped what appeared to be whiskey. “Why the hell would you move to Ohio from Charleston?”

Isaac shrugged as the boisterous kitchen conversation spilled down the hall. “Change of scenery.”

Somewhere, a glass dropped and shattered. Disinterested, Isaac paid the disturbance no mind so was ill prepared for a sudden assault. He huffed out a breath when Tommy suddenly tackled him to the floor, both their glasses flying. Isaac held his hands up, bracing for a punch…until he realized he wasn’t being attacked.

Tommy, eyes wide, scrambled off Isaac and sat back on his heels. “Shit, I am so sorry.”

Isaac leaned up on his elbows. “You okay?”

Jaw clenched, Tommy sputtered a chuckle. “Apparently not.” He stood and helped Isaac to his feet. He laughed some more and brushed at the front of Isaac’s blazer. “I, uh…” He pressed his lips together and glanced behind him. “New habits, I guess. Jesus.” He smacked Isaac on the shoulder. “Seriously, are you okay?”

Isaac’s heart thudded in his chest, but he still said, “Fine.”

“I need to get you another drink.”

Isaac picked up their dropped glasses, spilled but not broken. “It’s all right.”

“You came at a really bad time, man.”

“I know.” He did know. Well, he knew enough. School shootings were practically a weekly occurrence. Six people had died in a campus shooting at Hambden the spring before, although that was his only detail. Details seemed too heavy, the number of lives lost countrywide like rocks tied to the necks of those drowning in despair. Sara Dobie Bauer is a bestselling author, model, and mental health / LGBTQ advocate with a creative writing degree from Ohio University. Twice nominated for the Pushcart Prize, she lives with her hottie husband and two precious pups in Northeast Ohio, although she’d really like to live in a Tim Burton film. She is author of the paranormal rom-com Bite Somebody series, among other sexy things.