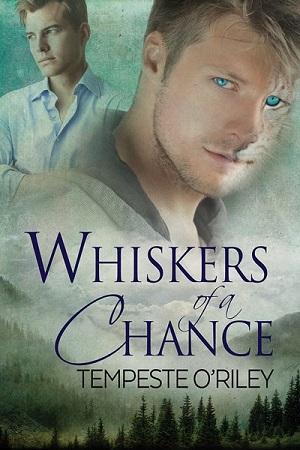 Title: Whiskers of a Chance

Blurb: Jason Grant runs his own IT business from home, owns his own home, and has the best friend he could imagine. What he doesn’t have, or believe he will ever have, is love. When Jason catches a glimpse of his new neighbour on moving day, his libido ignites and his fascination in piqued. He even manages to concoct an excuse to go over and meet the man who makes him hope and want for more than he has in years.

Keith Skyler is a shifter in a world where his kind is known to only a few, but they don’t often mix and they never mate. Keith has been hoping for a mate since before he can remember, but gay lynx don’t have true mates. As far as he knows, they don’t have mates at all. However, while moving his little family across Seattle—and away from their tribe—his reality tips and spins more than he thought possible.

When these two men meet over a dish of five-cheese broccoli-noodle casserole, sparks fly.

Who knew a welcome to the neighbourhood gift could give both of them their chance at love?

Review: I love a good shape shifter MM romance, in fact it has to rate as my favourite type of romance and Tempeste O’Riley’s Whisker of a Chance definitely rates highly among them.

Lynx and Alpha’s heir, Keith Skyler, has managed to move himself and his sister and nephew away from their tribe (chain) but most importantly, he has removed them away from his manipulative and evil father, the tribe’s Alpha. This new life has naturally set Keith off on an adventure he didn’t know could ever be possible for him – a gay shifter who was born to be an Alpha.  Keith was fairly certain, he would never have a true mate because he was gay.

Then there is Jason Grant. He was instantly infatuated by his new neighbour and after giving Keith a welcome to the neighbourhood casserole, he too is flung into an adventure and a world completely unknown to him.

I can’t really think anything that makes this book stand out as an OMG when it comes to shape shifter and soul mates/mates (or whatever jargon the author chooses to use), even when it becomes very apparent that there is more to Keith’s lynx than being an Alpha. However, I really did love this. The characters – both MCs and minor characters – were all wonderful. They all had their own complexities, which were thoroughly explored with our MCs and partially explored with the minor characters.

I especially love Jason’s BFF Sasha (Russian guy), Keith’s lynx friends including Vance as well as the wolves that Keith also meets through his work as a vet. In fact, I would have loved to have known more from the latter two groups.

The characters were complex, enjoyable and relatable – the sex was hot – the attraction and tension between Keith and Jason was palpable – and overall it was a lot of fun.