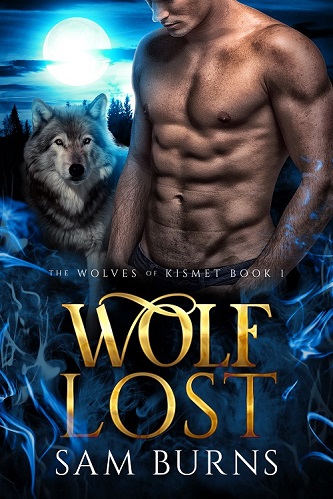 Series: The Wolves of Kismet 01

Blurb: An omega on the run.

Sawyer Holt can’t go home. The Alpha who has replaced his father wants to use him as a tool to cement his political power, and Sawyer isn’t interested in marrying his father’s murderer.

Dez Sullivan’s leg may never heal from his last mission in Afghanistan, but he’s getting used to that. What he can’t adapt to are the nightmares and the tremor in his hand that the doctors insist is all in his head. Next to that, being a brand new werewolf seems easy, until Sawyer Holt blows into his life. The omega activates his burgeoning wolf instincts in a new way, and they threaten to overwhelm his common sense.

Both men are in Colorado searching for a new start, a new pack, and the safety they’ve lost. Their meeting is pure Kismet.

Review: Sawyer is on the run from his Alpha. He wants nothing to do with the man or his pack. He shudders at what the alpha wants and rebels at the thought of marrying the man who murdered his father. He meets the Kismet pack when seeking a place to hide from those sent to return him to his pack.

Dez, Gavin and Ash are alphas. They served together in the military. Dez and Gavin were both turned Ash is a born wolf. Together the three men decide to open a coffee shop and move on with their lives after war.

When Dez and Sawyer meet it’s instant attraction. Dez is grumpy and snappy. He’s suffered injuries during the war that leave him self conscience. Sawyer is an outspoken and proud omega who refuses to bow to any man’s thinking. Together the two learn a thing or two about the world and help each other in their times of need.

I enjoyed the story and am looking forward to the next book in the series.