Hi guys! We have Rain Carrington popping in today with the tour for her new release 33 Degrees of Separation, we have a great excerpt and a fantastic $35 Amazon GC so check out the post and enter the giveaway! ❤️ ~Pixie~ 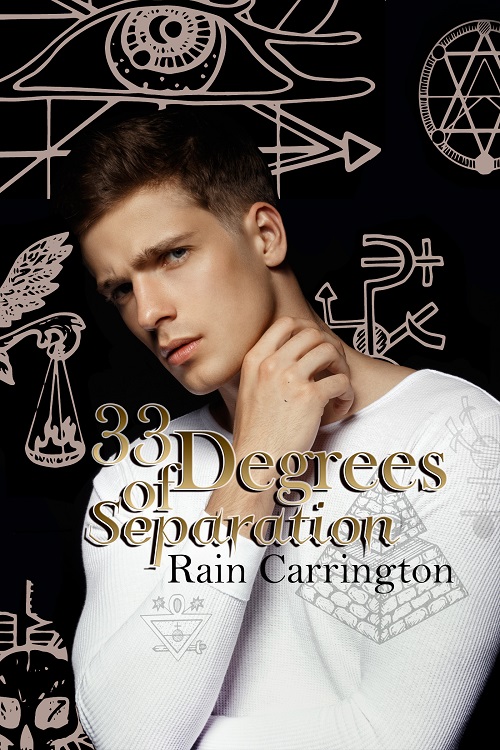 In the circle, robed men stood like generations before them. There they conducted meetings that brought together only those of the highest degrees. The old ways and traditions meant something to them. In each set of hands, a bejeweled chalice was held, every one of them unique and adorned with priceless, ancient gems.

One of the men stepped into the center of the circle, as was the protocol for members who wanted to speak. The flickering of candles on the tables all around the concrete and cinderblock room making his handsome features appear sinister. It didn’t help as there were symbols painted on the walls, symbols of their long faith, not in any god, but in their lineage and legacy.

Most of the men of the circle were old, living decades in the order to achieve their ranking. The few younger were seen as overly eager by the old men, rushing to power, but they never said this aloud. The order was clear, no infighting. The fight was out there, in the world, where other people lived like animals, cutting and cursing one another. The order, they were above that, civilized to a fault and more powerful than any of the scum who inhabited their world.

Their world. For hundreds of years, men dressed in the long robes stood in circles, deciding the fates of countries and continents. The world was theirs, and their power could be felt in every corner of it, though none of their faces were known, or their names.

The others nodded their heads in sync. One of the older men of the order spoke, and though his voice was low, it echoed through the room. “Is he to be trusted?”

The man in the center hesitated, but all it did was make the room quiet. The walls didn’t rock, the ceiling didn’t cave, and no one dropped dead. The room was simply quiet as all the thirty to thirty-three-degree members waited for their brother in the order to answer.

When he did, the voice rang out strong. “He is, or I will sacrifice him and therefore my family’s continuing legacy in our order.”

The others nodded again, assured he was telling the truth. Many of the original families had died out over the centuries of the order’s reign, but none had yet to be taken out from lack of loyalty and allegiance. The man in the center would not have his be the first to die off with dishonor.

As he stepped back to stand among the others in the ring, a bell sounded, like the old church bells in the lands where the families had come from, though through speakers instead of an actual bell. Chins raised, casting the flickering shadows on them all, fierce in their beliefs. Another bell rang, and they all raised their chalices to drink.

“Paucorum bonorum,” the man said, and the others repeated in unison.

Once the strong wine was rinsing down the throats of the men, the chalices were set at their feet. Ornate athames were brought from the robes and each made a smallish cut on their forearms. For a ceremony that important, they had to give more of themselves than words.

As the blood from each man dripped to splatter to the floor, their voices rang out again.

“The blood of our ancestors are in these veins, living forever, ruling all. Power, above all, be ours, though our faces stay shaded from the masses, long may our legacy live!”