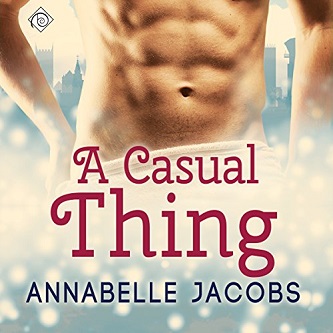 Series: Will and Patrick, 01

Blurb: Patrick Mason travels to Bristol to spend the summer with his brother, Ben. He’s cat sitting for the first two weeks while Ben goes on holiday. But Ben neglected to tell him he wouldn’t be do-ing it alone. Will Adams – Ben’s mate and Patrick’s long-time crush – is staying in Ben’s guest room while he waits to move into his new house after a breakup.

Against his better judgment, Patrick convinces Will that a little no-strings fun is just what they need. Patrick doesn’t want to get involved with a guy on the rebound, and Will isn’t interested in starting something serious with a student. But Patrick’s never been good at separating sex from feelings, and this time is no exception. As their weeks together draw to a close, they need to decide if they have something worth pursuing or if it’s really just a casual thing.

Review: A Casual Thing is the first book in Annabelle Jacob’s series called Will and Patrick. I honestly didn’t know what to expect when I saw this book, other than that I liked the look of the blurb. The whole hot friend of the older brother trope was what really sold me, though. I’m familiar with Annabelle Jacobs, but isn’t really an author that I have formed an opinion on. But ultimately, I am really happy that I did decide to get this audio, it was such a cute and sweet story and I really am looking forward to the next book in the series.

The narration of this story was performed by Matthew Lloyd Davies. A completely new narrator to me, I really enjoyed the over all performance. I particularly liked the voice and tone that he gave Patrick. I’m definitely keen to listen to more audios narrated by Davies because I found his voice and animations very pleasant to listen to.

Set in England, which I do love as well, Patrick Mason drives up to Bristol on his uni break, where he intends to crash in his big brother’s spare room and cat sit while said big brother goes off for a trip over the ditch in Europe. The only problem is, when Patrick arrives, he finds out that his brother’s best friend is crashing in the spare room after a rough break up. However, Will Adams is Patrick’s crush, back when Will had been with his ex. Because of the breakup and having to get the new house, Will can’t join his friends on the long-awaited trip. Patrick is annoyed and is torn because he doesn’t know how he will be able to navigate being with the man that he has crushed on for so long.

In a lot of ways the story is predictable. Two guys – one crushing on the other and the other is in a bad place post-breakup. Things are a bit bumpy at first but agreeing to a no-strings friends with benefits type of arrangement changes things, even if both men don’t quite want to face up to it. After all, they are only going to be occupying the same house for two weeks before Will moves into his new place. And while Will’s relationship with Patrick initially starts as a rebound, he also doesn’t want to start anything serious with a uni student – twenty-year olds being flighty and all that kind of stuff. However, Patrick has a soft heart and despite saying that this was only going to be sex and nothing else, he can’t help it when his feelings do become involved.

I really enjoyed this story. It’s super cute and very sweet. There isn’t a lot of angst, and so in saying that this is a really nice and relaxing story to listen to. Will and Patrick have great chemistry and their different opinions on starting a relationship make them interesting characters.