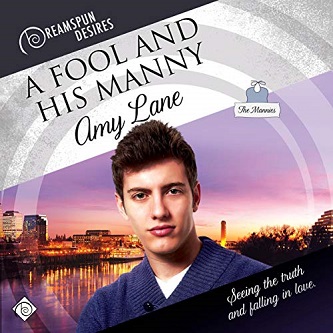 Title: A Fool and His Manny

Blurb: Seeing the truth and falling in love.

Dustin Robbins-Grayson was a surly adolescent when Quinlan Gregory started the nanny gig. After a rocky start, he grew into Quinlan’s friend and confidant—and a damned sexy man.

At twenty-one, Dusty sees how Quinlan sacrificed his own life and desires to care for Dusty’s family. He’s ready to claim Quinlan—he’s never met a kinder, more capable, more lovable man. Or a lonelier one. Quinlan has spent his life as the stranger on the edge of the photograph, but Dusty wants Quinlan to be the center of his world. First he has to convince Quinlan he’s an adult, their love is real, and Quinlan can be more than a friend and caregiver. Can he show Quin that he deserves to be both a man and a lover, and that in Dusty’s eyes, he’s never been “just the manny?”

Review: A Fool and his Manny is the fourth book in Amy Lane’s, The Mannies. I have adored every book in this series, so much so that I’ve both read the books and listened to the audio. It is just so super sweet, there is so much love and a crazy, whacky family supporting all the MCs.

This is the story of the oldest Robbins-Grayson, Dustin. His father knocked up his mother, in book one (the hero’s, Tino, best friend and sister) and way before his parents had a bajillion kids. Now Dustin is all grown up and attracted to Quinlan Gregory, the man we met in book 3, a trumpet player and friend of Sammy (Dustin’s cousin) who was taken in and hired by Dustin’s parents to be a manny for their herd of kids. Dustin was a teen by book 3, he isn’t that much younger than Quinlan, so I assure you, it really isn’t as weird as it sounds. This is a relatively low angst book, my favorite kind, and Dustin and Quinlan make a totally cute couple.

I really enjoyed seeing this side of Dustin. He was always a brat when we’ve seen him previously. Now he has grown up and matured into a young man. Quinlan was an ordinary college student and gifted musician when we first met him but there has always been an element of loneliness to him from the start. He is one of those characters that I felt strongly and looked forward to having his own HEA. It makes me ridiculously happy to say that. I love how Lane has developed all the characters over the four books. On a side note, I loved the conversation on the band bus involving Harry Potter and how the kids grew up from cute kids to good looking (yes, we’re talking about Neville Longbottom!).

Kenneth Obi is the narrator and does a wonderful job. Obi did not narrate the previous books in the series (John Solo was the narrator for books 1 and 2, and Peter B Brooke was the narrator of 3), I’m not sure if this was on purpose in terms of what the narrator could bring to the characters, or if it was just a matter of availability. Nonetheless, I’ve enjoyed many of Obi’s performances and this was no exception. He added a depth to the characters with his tone that meant I could feel when the high emotional times popped up.

This is a must read for anyone who has been following the series. I’ve tried to be concise with my description but as you can probably tell, there is a lot of background, hence my recommendation. For those that haven’t read the series, I recommend reading it in order because this is a proper family saga that spans approximately 22 years. If you love a sweet story with a HEA and low angst this is the book for you, especially if you’re a sucker hot guys working with kids.