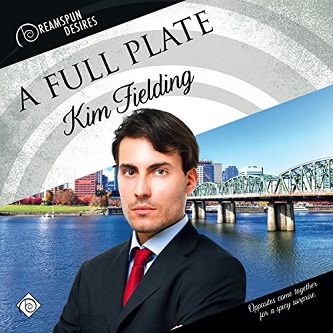 Blurb: Opposites come together for a spicy surprise.

Bradford “Tully” Tolliver has everything—money, a great car, a beautiful condo, and a promising career as one of Portland’s hottest young lawyers. Sure, he puts in long hours and has no social life to speak of, but who needs romance when corporations pay top dollar for his expertise? He hesitates when a colleague asks if her cousin can live with him, but the arrangement will last less than a year, and then the cousin—Sage Filling—will return to his tiny hometown.

But Sage is handsome and intriguing, and his cooking makes Tully swoon. Sage has obligations back home, though, and Tully has offers he might not refuse from a persistent—and very wealthy—ex. Since Tully and Sage each have a full plate, can they make room for a side of love?

Review: A Full Plate is a novel by Kim Fielding from the Dreamspun Desires line. I’ve read this book in the past and have enjoyed it, I love the ease of the audio format for my commute and so enjoy listening to books that I’ve read and liked in the past.

I’m also always curious because sometimes narration can help me enjoy the story more. This story was excellently narrated by Kenneth Obi, a narrator I’ve become more familiar with in the past 6 or so months and I’ve never had an issue with his narration. I really enjoyed the he gave to the characters and the tone used throughout the book. It worked well. I think the only reason why his narration didn’t allow me to enjoy the story so much more than when I read it is probably because I felt that the story was a tad slow in the middle leading up to when the characters get their butts into action. Not to say that this was a bad story, because obviously, I don’t think that at all.

The story is about high-power lawyer Bradford Tolliver, better known as Tully to his friends, and Sage Filling, the cousin of one of Tully’s friends. At first it seems like these guys are complete opposites. Tully is a well-educated city boy, whereas Sage is a country boy who had spent so much time and energy running his family’s diner in his home town. Sage needs to make money and he can’t do it at the old diner anymore, so he’s in the city where he is a line cook at a greasy burger joint. Sage also happens to be a cooking prodigy; his only problem is that he doesn’t have the fancy education to be much more than a line cook anywhere. Tully takes Sage in as a roommate, in exchange for his room and board, Sage does all the cooking.

These guys don’t come together easily. Their road to each other is a little bumpy to say the least, mostly because Sage doesn’t want to start a relationship when he is only going to be in Portland for less than a year. Tully will take anything he can with Sage, even if he knows it will end in heartache. Regardless, these guys are clearly made for each other and their subtle romance is something that I cheered on. The most telling part was when their lives meshed together so easily and both men displayed some misplaced jealousy.

If you’re into a sweet romance between a country and a city boy this is the story for you. I enjoyed the lack of ego and these guys just being average guys trying to make their lives work.