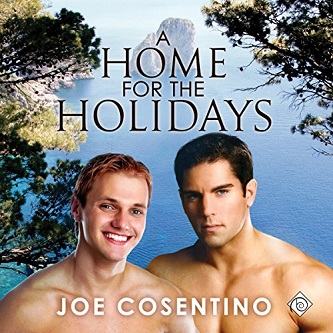 Title: A Home for the Holidays

Blurb: Bobby McGrath’s Christmas trip to the beautiful Italian island of Capri to meet his eccentric extended family offers stunning views – none more stunning than his third cousin, Paolo Mascobello, a real stocking stuffer. As the two young men embark on a relationship, Bobby, a driven law student, learns to relax and bask under the Italian moon, and Paolo realizes there’s more to life than a frolic on the beach. For the two to find everlasting amore, Paulo must overcome his fear of commitment and learn to follow his dreams, and Bobby must get his wish for happily ever after.

Review: A Home for the Holidays is a short story by Joe Cosentino. While I love Joel Leslie and despite what I think of the book itself, I can’t really fault his narration. Meanwhile, Joe Cosentino is a new author for me. The audio is under two hours, so if you got a commute and want a story that you don’t really need to pay attention, this will probably work for you. For me, I started thinking about it too much and got annoyed. It wouldn’t have been so bad if I hadn’t started thinking too hard on the story.

The story is about Bobby McGrath, who is sent over to Italy for his Christmas present to spend the holidays with his mother’s Italian family. That’s where he meets his third cousin and immediately falls into lust. Paolo Mascobello, the hot Italian third cousin, shows interest but he is purposely holding himself back (but not because they are related). Paolo lives with the expectations of his well-off family and so his dreams are stifled until Bobby convinces him that perhaps it’s okay to dream.

I think some people would be bothered by the whole third cousin thing, but since the guys never met before this holiday, it doesn’t bother me so much. For me I was mostly put off by the bad Italian stereotypes, being that I got my crazy Italian family on my mother’s side I found some of it cringeworthy. The only other thing that annoyed me was how much Paolo brooded without communicating – it got on my nerves. However, one thing that the story has going for it is that the story is fast paced and I liked how Bobby carried himself and developed through the story. Being so short there isn’t a lot of room to move, so I think all good stuff was given to Bobby and that made him a sweet and relatable character.