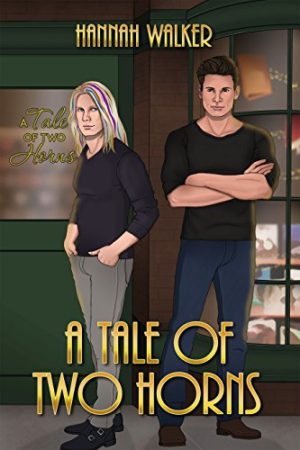 Title: A Tale of Two Horns

Blurb: Being one of the rarest shifters that exist, Charlie tends to hide his unicorn from the world, choosing to surround himself with what he loves — books. Owning one of the best bookstores in the area, he dedicates his life to his passion, and to spending time with family and friends.

Knox Vaughn is a hero, a larger than life Siberian tiger shifter who has earned the respect of everyone in the paranormal world. Few know the real man, the one who fights for his family and friends and hides who he really is inside.

When a simple mistake thrusts Knox into Charlie’s bookstore, he finds himself smitten with the young unicorn. Two lives couldn’t be more different on the outside, but Knox has a secret, one he’s never shared with anyone other than his family. One that proves he’s not so different from Charlie after all.

Unable to ignore the chemistry between them, Charlie and Knox grow closer, but as they do, trouble descends on the small paranormal community, threatening to keep them apart. The two must come together, trusting in what they feel so they can overcome the threats to their union.

When secrets are revealed and truths admitted, bonds form that won’t ever be broken. Still, when it comes to tigers and unicorns, it might not be enough to save them.

Review: I have to say I was a bit taken back after reading this story. I was expecting more action than the one scene at the end that ended all to quickly. Mostly this story is about Knox and Charlie and how they grow closer despite opposing forces.

What I would have really liked is that when the paranormal military unit went on missions is that we were told in detail what happened. But alas that did not happen. I like action in my paranormal stories so I was surprised this one did not have what I was expecting.

Never the less it was an enjoyable, sweet, funny read. I hope to read more in this series with a lot more than just two men getting together as it did not feel like an actual paranormal book to me.