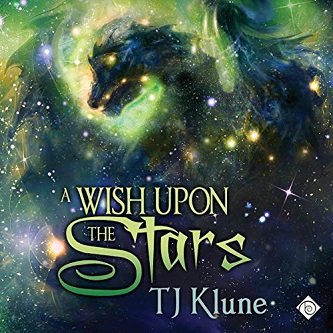 Blurb: Nearly a year ago, blinded by grief and betrayal, Sam of Wilds made a desperate decision to fol-low the Great White into the Dark Woods. Now, he emerges to a world changed.

But soon after his return, Sam learns of a resistance fighting in his name, led by a courageous knight, a defiant prince, a pissed-off unicorn, and a half-giant who wants to smash everything in sight. If he has any hope of defeating the villains who have taken their home, Sam must face the consequences of his choices – and the friends he left behind.

Review: I absolutely adore TJ Klune. I adore just about every book he writes. I love how he can make a reader laugh and cry within the same book within pages of each other. But mostly I love how he can keep an audience entertained where I am, more often than not, laughing throughout a book, and in the case of audio books I’m often on public transport trying not to be obvious. However, that also applies for when I’m on public transport and trying not to cry.

A Wish Upon the Stars is the fourth and final book in TJ Klune’s Tales of Verania. The whole concept of wishing upon the stars is a theme that has been present throughout the series, as have the titles of the other books. However, I feel that this is the most aptly named of the series. It is essential to read this series in order because this is complex world that has been built, with some equally complex characters that are very well developed and at this point I am completely invested in.

The world is completely different in the aftermath of the previous book, The Consumption of Magic. Sam, strong willed as he is, decided that he had to fulfil the prophecy of the Great White Dragon (or as Sam calls him, GW). And so after being away almost a year, he has returned to chaos. On top of that his friends are furious with him, especially his very own knight and wizard’s cornerstone, Ryan Foxheart. They have become hardened warriors as the dark wizards take over and it is pure heartbreak. On top of that, the king is now held prisoner, but this has given the chance for Prince Justin to step up and become an absolutely amazing character. The only person he has on side at first is Kevin, who is also in the proverbial doghouse with Gary, since the dragon had followed Sam with no words to his sassy unicorn lover.

There is more heartbreak to comes as the ends of the stories are eventually woven and we find out the fate of Verania. This book brings in a lot more humour as the gang is reunited and are finally working together once again to defeat Myrin and the dark wizards he commands. There are so many funny moments, including when we get to meet Gary’s twin brother or the interpretive dance that was performed as Gary tells the story of how he lost his horn and therefore a great deal of his magic. I was so glad that that storyline was resolved and we got to see Gary return to all his glory as the pieces came together and the final battle takes place.

As with the previous instalments in this series Michael Lesley’s is an absolute joy. His delivery is heartfelt and pretty much flawless. He has carried on to the end with the same distinct voices that he gave to all the characters, which I feel has enhanced the entire experience. He wonderfully articulates the emotion in the characters as they go through their highs and lows. I don’t want to keep gushing as I know that I am repeating myself about my adoration of Lesley’s narration and Klune’s writing. Cannot recommend enough.

I am sad to see the end of this series. I was surprised that I did in fact love The Lightning Struck, which is why I continued on to the next three books, after not enjoying reading it a few years ago when it first came out. I absolutely loved the ending as the ends all tied together. I feel battered and bruised but just as Klune expertly does, he’s pulls you apart with the emotions he injects into his words and slowly builds you back up, even when the odds were completely against our heroes. Rumour has it TJ plans to do a story for Prince Justin (Sam’s best friend 5eva) and that is something I look forward to, although the man seems so busy I’m sure it’s going to be at least a few years.