Hi guys! We have Kilby Blades stopping by today with the tour for her new release Adam Bomb, we have a great excerpt so check out the post and enjoy! ❤️ ~Pixie~ 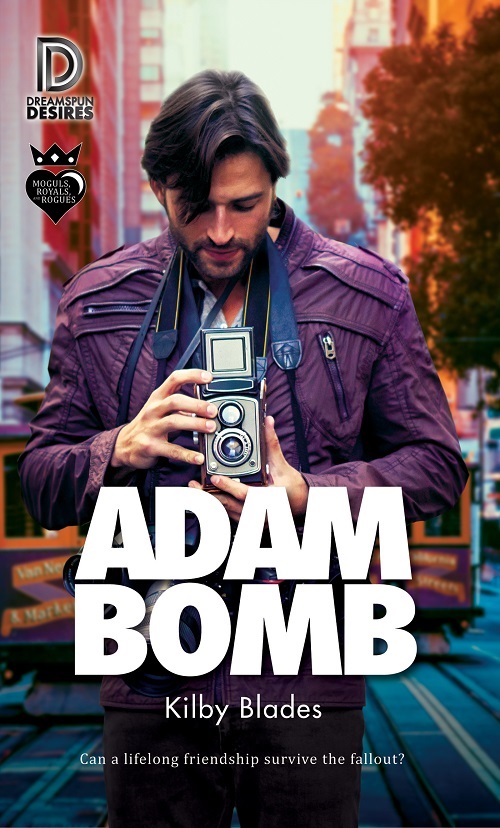 Levi’s best friend, Adam, has always been larger than life: a smoking-hot billionaire hotelier with imposing charm. When Manhattan stops being big enough for both of them—at least if Levi ever wants to fall out of love with Adam—Levi accepts a job in in San Francisco.

But when Adam pulls an Adam—upending Levi’s calm new life with a plea to lend his photography talent to a worthy cause—Levi is helpless to resist. Adam will be the first Fortune 100 CEO to come out of the closet in grand fashion. He needs a trusted ally on his PR team. And the job will only last three weeks.

Levi accepts on one hidden condition: he’ll keep his new friends away from Adam, certain that if they get a whiff, they’ll fall under Adam’s spell. Bent on keeping his two lives separate, Levi barely makes it through the first two weeks unscathed. Then, Adam drops another bomb….

The tip of Adam’s nose had begun to pink, and his cheeks were doing the same. Levi wished them back inside the airport, wished to divine whether Adam’s color owed to emotion or to the winter of San Francisco spring wind.

Adam scanned. If they wanted to reach the limo line, they had to go to an outer curb across the street. Adam started walking and Levi kept in step, barely heeding traffic to study Adam’s face. On the crosswalk, Adam replied, “A couple months ago.”

Puzzlement pierced through Levi’s stark relief. It was stupid, the way he was happier when Adam was single. Such news delivered the same foolish rush of hope that swelled over Levi when one of his celebrity crushes filed for divorce or came out. So what if Adam broke up with his girlfriend or fine-ass Wentworth Miller came out of the closet? It didn’t mean Levi had a chance.

The color on Adam’s cheeks as he spoke his confession was definitely a blush of shame. What kind of best friend forgot to mention for “a couple of months” that it was Splitsville between him and the girl his father wanted him to marry?

“You wanted to tell me in person you broke up with your girlfriend? That’s your big news?”

Adam had the decency to look chagrined. “None of it has to do with her.”

“You’re being cryptic,” Levi pointed out. “Adam. What the hell is going on?”

Levi’s heart raced faster than it had when he’d merely believed his best friend, whom he’d nursed no small crush on over the years, had taken himself permanently off the market. But Adam was being weird—his Adam, the most shameless and least apologetic person Levi had ever met. Had he screwed up in Tehran and put the company in jeopardy? Lost his fortune? Committed a crime? And what was the favor? Did Adam need Levi to hide him in Argentina with his grandparents, or to donate a kidney? Oh God. Was Adam sick?

Adam looked over his shoulder, paranoid, as if he would be recognized at any moment. He was far from famous, but he’d had his share of press.

“Let’s talk about it in the limo,” Adam whispered, splitting his attention between placating Levi and signaling to the car bearing his hotel’s name. “It’s nothing bad. It’s just… not public yet.”

“What’s not public?” Levi pressed the moment the limo stopped at the curb.

Adam threw him a pointed look and sighed. “I’m coming out. Again.”

“Coming out of what?” Kilby Blades is a 40-time-award-winning author of Romance and Women’s Fiction. Her debut novel, Snapdragon, was a HOLT Medallion finalist, a two-time Publisher’s Weekly BookLife Prize Semi-Finalist, and an IPPY Award medalist. Kilby was honored with an RSJ Emma Award for Best Debut Author in 2018, and has been lauded by critics for “easing feminism and equality into her novels” (IndieReader) and “writing characters who complement each other like a fine wine does a good meal” (Publisher’s Weekly).