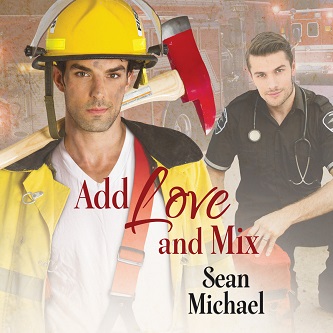 Blurb: Firefighter Jason “Jase” Weller and EMT Scott Bronson are living the perfect life. They work together in jobs they love, they live together, and in their downtime, they still can’t get enough of each other. It’s been six amazing years. Then on Christmas Eve, Jase’s former lover Elsa shows up with a six-year-old girl in tow. The strung-out junkie claims Kerry is Jase’s daughter and it’s his turn to care for her, and then she walks out.

Shocked at both the fact that Elsa is now a junkie and that he has a daughter he never knew about, Jase nonetheless steps up to the plate as her father and Scott offers his full support. Having an instant family comes with plenty of challenges, and the two men work to deal with sweeping changes in their lives and to make things right for Kerry.

It’s not going to be easy, and their new circumstances test them and their relationship like noth-ing ever has. They’ll need all the love they have for each other–and the love they discover for their daughter–to keep from breaking apart.

Review: Add Love and Mix is a totally charming book by Sean Michael, an author that I feel I am only starting to appreciated within the past year. Michael seems to have a knack with creating relatable characters that are both ordinary (thus making them relatable) and yet extraordinary (which makes the story interesting). What I love most about this book is that this isn’t so much a romance of relationship that is starting, it’s the story of a well-established couple who go through an extremely turbulent time which changes their family.

The narration of this book was done by Steve Balderson, who is a totally new narrator for me. Overall, his voice lent great depth to an already awesome book. His voice suited both emergency service worker MCs. I’ll definitely look forward to more books narrated by Balderson because this was simply a fantastic narration.

The story itself about firefighter Jase Weller and EMT Scott Bronson. The two have been together for six years and they see each other at home and work. They never had a reason not be scheduled on the same roster rotation at the fire station they work out of and they have been living a blissful life. All that changes close to Christmas when Jase, who is bisexual, has an unexpected visit from his ex, Elsa, who had been seeing before he got together with Scott. A lot has changed with Elsa and the main part is that Elsa turns up with a little girl, saying that she is Jase’s and that she doesn’t want the kid anymore.

It is a totally heart-breaking scene, especially after hearing of the palpable love between Scott and Jase. This is going to rock their world and their family. But kind and caring Scott immediately makes a rapport with little Kerry. But there is a ways to go before their happily ever after. Both men have to deal with this massive change to their family. Jase must understand what it is to become a father and to begin getting Kerry settled. Of course, Scott is right there next to Jase, supporting Jase and taking on as much responsibility for their daughter as the little girl deals with feelings of being rejected from her junkie mother. Add on to this Scott’s own baggage of knowing what he wants to do – he feels for Kerry because he was adopted by his parents – but the stress can get to even the most sainted of men.

This is the out of the ordinary story of two ordinary men bringing their family together and I loved it. Totally sweet and worth the read!