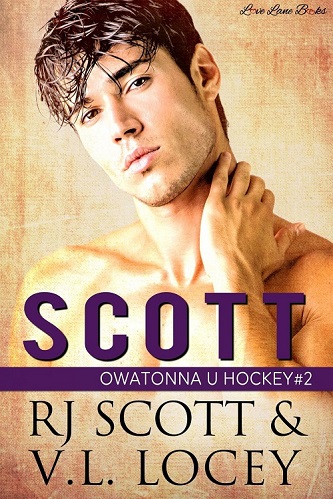 Blurb: What happens when you try to fix the past and end up threatening your future?

Scott is struggling. Grieving the loss of his brother, carrying the weight of his father’s expecta-tions, and getting his ass kicked in the rink, he’s in a downward spiral. He needs a solution and fast, but when his steroid use is exposed, he’s close to losing his place at Owatonna and more importantly, on the Eagles Hockey team. Thrown out of his house, with nowhere to go and no future in sight, he only has one choice; agree to mandatory counseling, random drug tests, and get his act together. Only then will he have a chance at normal. Meeting Hayne, a senior con-nected to the world through his art, is a shock to the system. Moving in with him is his only op-tion, but falling for the shy artist leaves Scott in an impossible situation, and one he can’t es-cape.

Hayne has always been that quiet, creative kid who sat in the back of class drawing instead of listening to the teacher. A talented artist, the shy and sensitive young man is struggling with the loss of his childhood friend. Seeing his sadness reflected in his usually colorful paintings, he decides to attend grief counseling and meets Scott, a lost soul in desperate need of light and color in his life. Taking in a homeless hockey player certainly was never part of his carefully or-chestrated ten-year plan. But now that Scott is in his life, he’s discovering the joy of this man’s loving smile and tender touch is one of the most beautiful palettes on earth.

Review: Scott is the second book in VL Locey and RJ Scott’s Owatonna U series. I adore the authors, VL Locey and RJ Scott, and I especially adore their hockey romances that they write together. I could go on for a long time about how much I love their style of writing and how their characters develop and grow, both outside of their book and within the book where those characters become MCs.

Unlike the first book, which starts off feeding directly from the authors’ Harrisburg Railers series from which it spun off from, you do not need to have any background from the Railers series. However, there are a few Easter eggs for avid fans on the look out for them (*clears throat* cameo and mentions of Jared Madsen and Tennant Rowe). In saying that though, I do encourage those that have not read Ryker to read that one before you go into Scott, because Scott’s story (well the moment where everything crashed down for him) happened in Ryker. Scott is dealing with the aftermath. Ryker and Jacob, in addition to Scott’s best friend Ben, make a few appearances because sometimes an intervention is needed and these guys are awesome friends.

Scott has been struggling to keep his head above water for a few years now and it all culminated in him making a massive mistake, taking steroids in the hope that his playing will improve. The problem with that is that he has hurt a lot of people, and sadly he doesn’t even remember a lot of it in his drug and alcohol haze. This isn’t because he is trying to be an arsehole jock. In fact, it’s really complicated and stems from his family’s complete breakdown after the death of his older brother, who Scott had idolised and is now constantly compared to by his father. Like many things that involve addiction or grief – or something else involved in mental health – it has built up to the point where Scott has hit rock bottom and has no choice but to deal with it.

Part of Scott’s recovery is going to group grief counselling sessions at the university. Scott has completely detached himself from everything in his life and is just looking to survive. However, things change when he meets Hayne. Hayne is a sweet and kind artist, he is grieving over the loss of his best friend to leukaemia. Hayne is also broken, but very different to Scott’s hurts, and he is dealing with things a lot better. Helping Scott is natural but becomes part of his recovery.

I love the themes of this story – two completely broken individuals building themselves up again, but they have to realise that they can’t do it alone and that each journey is both different and the same. Scott and Hayne are a wonderful couple.