Hi peeps! We have Nat Kennedy stopping by today with the stunning cover to her upcoming release Afflicted to the Core, check out the cover & blurb for this upcoming release! ❤ ~Pixie~ 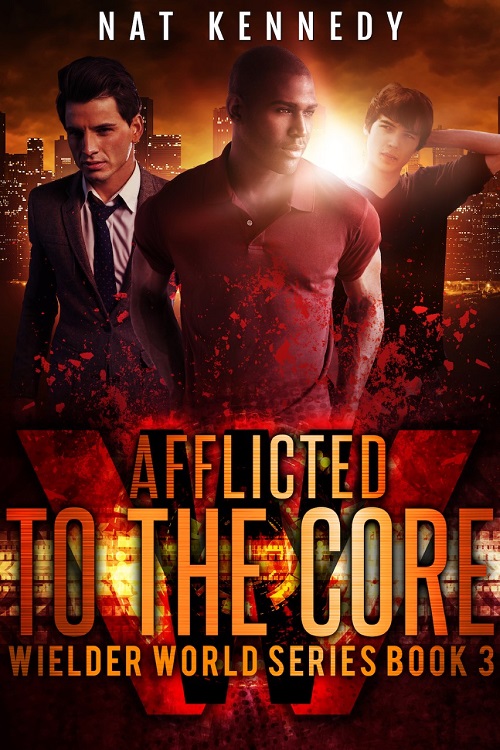 Afflicted to the Core

Reggie Wolfe religiously visits Kyle Landon—his student in Nerve detangling—at the Harpford Disentanglement Center, where theyounger man has been incarcerated on trumped up charges. During one of Reggie’s visits, Kyle’s able to warn his teacher of an imminent unauthorized transfer by an unknown shadow agency. Reggie demands help from his sister at the Bureau of Wielder Services but is pressed to take the matter into his own hands when bureaucratic red-tape stymies her actions. Breaking into a secret medical installation, Reggie and August Whalen find Kyle and six other men hooked to IVs, unknown chemicals pumping into their systems.

The three are caught up in a quest to find an antidote for the drugs and discover who is behind the powerful anti-male Wielder organization. On this dangerous road, will they forever remain friends, or give in to their growing attraction? Nat Kennedy grew up living in a poorly populated desert landscape. With no neighbors in a 1-mile radius, she had to make up her own fun.

Nat strives to create plotty and imaginative fantasy worlds, with the added benefit of gay romance–steamy to tame. Bored of het romance, she jumped into writing her fantasy with gay romance swirled in, like a raspberry ribbon in vanilla ice cream.