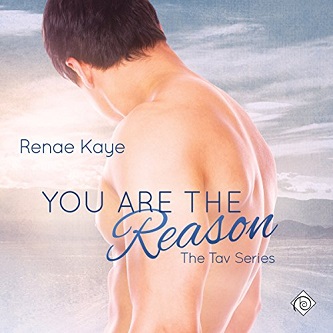 Title: You Are the Reason

Blurb: Davo’s a pretty average guy. He has a decent job, owns his own home, and spends his week-ends at the pub. He fully accepts that he’s gay, but doesn’t want to be one of those gays who are girly. He likes football and other masculine pursuits, and firmly avoids anything that could be seen as femme – including relationships that last beyond 15 minutes.

Then Davo’s friend and gay idol not only gets a boyfriend, but also adopts a baby girl. Davo is seriously spooked and scuttles down to the pub. That’s where he meets Lee, cute from her cherry-red hair to her pretty little dress and pointy red shoes. Davo is charmed – but how is that possible? He’s gay. Isn’t he? Then Lee tells him he’s actually a guy – he just likes to wear women’s dresses occasionally. Thoroughly confused about an attraction that’s out of character for him, Davo begins the long journey to where he can accept himself without caring what everyone else thinks.

Review: Renae Kaye is a new author for me, which is surprising because I love to check out Australian MM authors, so no idea why it took me so long to get onto the band wagon. You Are the Reason is the first book in Kaye’s series, The Tav, a series that I’m interested in reading more of. This is a really awesome book where the MCs grow a lot as they become closer. The evolution of the characters was really the highlight of this book, although an Australian romance that isn’t based in Sydney (NSW), Melbourne (Vic) or on a farm (this one is based in Perth, Western Australia) is another highlight and refreshing.

The only issue I had was the narration. Dave Gillies, a new narrator for me, did a pretty damn good job and really providing the right tones for the characters throughout the book. My issue was the accent. I realise that narrators can’t always do a perfect accent and I know Australian accents are notoriously tricky (see how many times Hollywood manages to completely butcher the accent). However, there were times where the accent was just… not right. I think if you’re not Australian, the performance is all well and good, but for an Australian, I found it a little annoying at times.

Davo is your typical Aussie larrikan, right down to his name. He’s out and proud, has a good job, own’s his own home (a sure sign that this isn’t based in the eastern states! Haha!) and has some great family and friends. To add to the Aussie bloke persona, there are some lengthy discussions of Aussie Rules football. I think the explanations are easy enough to understand some of the rules, but I’ve gone read plenty of American football romances and ice hockey romances and I got no idea any of the rules of those games. Not that this is an important thing beyond the fact that Davo is a footy fan (I’m an Aussie that does not like AFL or NRL so it kinda makes me roll my eyes because not everyone is obsessed with football). Meeting Lee at a bar changes his entire world. Especially when he initially fears that he is a gay man attracted to a woman, when in fact Lee is a gay man who likes to occasionally dress in women’s clothing.

This is a really fascinating book. There is a brief discussion of trans people, especially when it’s clear that Davo really doesn’t understand the difference between transgender and transvestite (? I’m not sure if that’s the right wording and please do not be offended if I have got this wrong, I do not mean anything negative to anyone). It really digs a bit into the issues faced by the trans community from within the LGBTQI community. Another really important theme that makes up a majority of the book is the whole “Aussie bloke” and “don’t be fairy gay” and similar phrases that come up, particularly in Australia. I really enjoyed Davo’s storyline, finding out what made him think “it’s ok to be gay, as long as I don’t act like a girl” despite his supportive family and learning to overcome these thoughts as he grows closer to Lee. Lee is a refreshing character and totally wonderful, he has all the patience and love in the world and he is exactly what Davo needs!