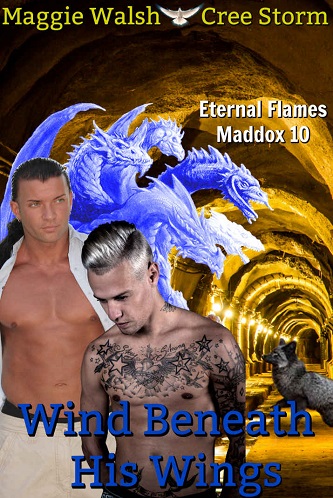 Title: Wind Beneath His Wings

Casimir refuses to believe that Sutton could just leave him like that and thinks Sut only needs a few days to cool off. However when reality sets in Casimir realizes he has made a terrible mistake, when Sutton refuses to talk to him or even look in his direction.

When Sutton goes out on a rescue call to a local mine there is a cave in which leaves Sutton trapped with four other men in desperate need of medical attention. Casimir practically goes insane trying to get his man out alive. When the threat of losing Sutton for good hits Casimir, he promises not only to himself but to his mate, that he will do whatever he has to do to make things up to Sutton and win him back. He can only hope that if Sutton survives, that he will be willing to give Casimir one more chance, because the alternative is just too devastating to consider.

Review: Each book in the Eternal Flames Maddox collection features a new romantic couple. To enjoy the overall story arc and crossover characters, I would recommend reading the series in sequential order. This story is connected to Eternal Flame as well as a couple others.

Casimir lost his wife and his parents to the war along time ago. In fact they had though that the dragons and phoenix’s. He thought it was just his luck to loose all he loved. When they found out that several survived including his brother he was jolted in surprise. Then to find out that his wife had left him with two sons, he was terrified. Then to find out he had a mate, he just thought he would loose them all, so he kept his distance. Then Sut is trapped in a cave in and well he let his heart rule.

Sut had given his heart to Cas but feared that it was all a dream. To be his dirty little secret, well to hell with that, Sut was giving up. Then when the world tilted and he was stuck in a cave, well the voice of his mate kept him sane. However fear still came forward not knowing what to expect from Cas.

First off this was probably the best book out of the whole series and that was saying something, cause this series rocked. I was reading and got to the point of Cas singing, and went and put on the song. So imagine the story going around in your head while the song is playing just made the story stand out even more. I felt for Sut and was glad that Casimir got his head out of his ass, but damn the ending was funny as hell. Who knew fate had a twisted sense of humor.

I had a blast reading this and can guarantee that it is one of those types of stories that will be read many times over. I can’t wait to read the next book. I would definitely recommend this book and the others connected to it.