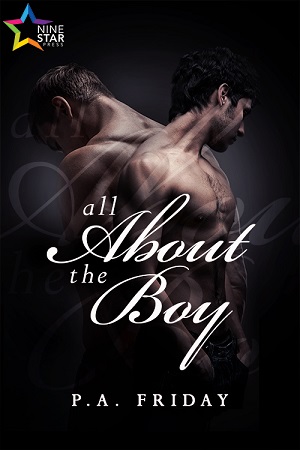 Title: All About the Boy

Blurb: Some men like gentle loving—others like to switch up the power. In P.A. Friday’s collection of stories, explore the raunchier, edgier side of lust—a space where domination and control can be the greatest turn-on.

From Stefan finding out the hard way just how straight he isn’t, Jake who has to learn to behave or take his punishment, to Kel juggling two very different lovers at his workplace, doing what you’re told has never been sexier.

Review: What I thought was a short story turned out to be 3 very short stories. The problem was they were not really stories, just some hot sex scenes.

Rufus came out to his friends that he was gay but what he had not told anyone was how he wanted Stefan. One of his best friends but the man was straight, or so he thought. One hot night of drinking leads them all into a game of hide and seek. The one found had to forfeit something, but when Stefan was found it turned out to be something else.

For such a very short story, the author did a good job of making it seem just a bit longer. It was not really my taste, but it was a bit hot.

Jake is in trouble with his master and he needs to be punished. Alessandro has one major rule for him to behave. The problem was Jake like his punishment just a bit much. Except maybe this punishment might just be a bit to much. Just give him to Leo.

No real story here but it was still pretty hot. Just a bit of kink to go with the day I suppose. However it was really just to much for me. I think giving your boy to another is degrading and gross in my eyes. Especially if you know your boy doesn’t like the other man. It was a complete turnoff for me.

Kel has two sexy lovers at his work place and liked to be bossed around a bit. Dean and Peter who would have thought.

Just a bit to much for me. Sounded a bit violent and I don’t much care for the way they were treating one another, although it was still hot I suppose. Kel has two lovers who don’t know about each other. He is a dominant and a submissive, basically a switch. Dean is a violent dom, where as Peter is a complete submissive. To me two lovers who don’t know about the other is cheating, and the book dropped completely.