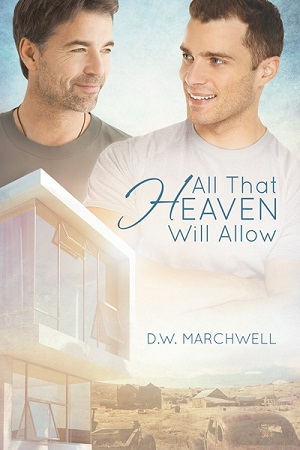 Title: All That Heaven Will Allow

Blurb: Jimmy Campbell has owned his own bar for the past twenty years. While his past is troubled, his present and future make life worth living. He has good friends, more than enough money, and he volunteers—along with his Yorkie, Bozo, and his Maine coon cat, Miss Alicia—at the local hospital every Friday. He couldn’t ask for more. That is, until he meets Derek “Dizzy” Roberts.

Derek is a musician who tours the country with his band. He’s an ex-cop, was married once, and has the bitter ex-wife and two spoiled children to prove it. He’s finally living his dream, and that includes bedding all the groupies who think he’s every bit as good as his music. He doesn’t worry much about the future, until he meets Jimmy.

The two men begin a long-distance romance, sneaking weekends here and there, until a tragedy forces them to realize they might lose the only thing they both want–a future together. Now, they’re asking for everything heaven will allow.

Review: If you like sugar-sweet romance, long distance romance, slow build-up romance…this is the book for you. It was nearly too sweet for me, but hey it’s a warm and fuzzy feel good read.

Jimmy owns his own bar, is a bit of a control freak in all areas of his life, and he REALLY loves his animals. He’s such a do-gooder he volunteers his time not only helping out rescued animals, bit then trains them to be therapy dogs and brings them into hospitals and yes….children’s hospital wards. Do your teeth hurt yet?

Now Derek is a playboy. Recently out of the closet and divorced he’s been eating at the man-candy buffet for a while and knows he’s a hot package. Only his one-liners don’t’ seem to work on a cute, sexy bar owner, that’s Jimmy, and it immediately snags his attention. He’s ready for more than a one-nighter, but Jimmy is putting him through his paces.

The two develop their courtly romance the old fashioned way, emails, texts, letters, dates….actually getting to know each other before jumping each other’s bones…which when they do is really hot.

But both have a past, that combined with fate may destroy these two…or who knows….tests of faith may bring them closer.

A slow build, in more ways than one, and again….cotton candy sweet. If you need a break from angsty, kinky reading…this is a good diversion.