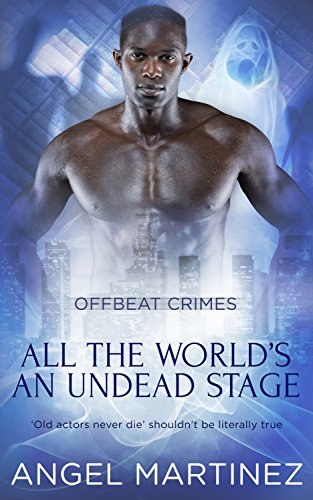 Title: All the World’s an Undead Stage

Carrington Loveless III, skim-blood vampire and senior officer of Philly’s paranormal police department, has long suspected that someone’s targeting his squad. The increasingly bizarre and dangerous entities invading their city can’t be a coincidence. So when a walking corpse spouting Oscar Wilde attacks one of his officers, Carrington’s determined to uncover the evil mind behind it all.

As a rare books librarian, Erasmus Graham thought he understood some of the stranger things in life. Sharing a life with Carrington has shown him he didn’t know the half of it. They’ve survived attack books and deadly dust bunnies together and got through mostly unscathed. Now his world and his vampire’s appear ready to collide again. Books are missing from the Rare Book collection—old tomes of magic containing dangerous summonings and necromancy. He’s certain whoever has been stalking the Seventy-Seventh is composing their end game. It’s going to take a consolidated effort from paranormal police, librarians and some not-quite-authorized civilians to head off the impending catastrophe.

Review: Carrington and Erasmus, from book three, are back in this sixth installment of the series. They are still trying to find their footing in their relationship while at the same time Carrington takes over as leader of the squad. The team are on a mission to stop the ending of the world in this showdown against good vs. evil.

I liked the cast of different paranormals withing the unit. They are each different and bring a different element to the series. Well written with drama, action, suspense and mystery this series takes the reader on a journey with the team apprehending bad guys along with getting to know the team members themselves.