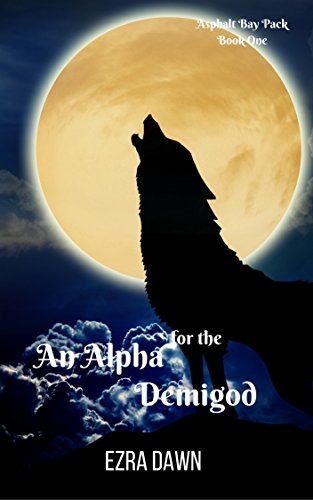 Title: An Alpha for the Demigod

Blurb: Declan Devine is the soon to be Alpha of the Asphalt Bay Pack. He’s a total playboy that refuses to settle down. He enjoys having his pick of any partner with no regard for what’s between their legs. Well, until his father decides to force him into a mating before becoming Alpha. With no time to search for his true mate, Declan chooses the next best candidate.

Liam “Lykos” Cassidy is a very powerful demigod. The result of a joining between the sea god Poseidon and a wolf shifter. Favored by his uncle Zeus, Lykos has extra special abilities given to him by Zeus himself. As a “Fixer” for the Paranormal Council he uses his abilities and knowledge to solve any problems that arise. Bordering on psychotic with some of the things he does, he’s a force to be reckoned with.

Will Lykos finally have someone to call his own despite his frigid personality? Will Declan reject the gift given to him by fate for the sake of duty? Or will everything go the way fate decided it should?

Review: Declan is being forced to mate and take over the alpha position in his pack. He doesn’t want to settle down, or at least not without his fated mate. To bad for him he just doesn’t have the time. So he settles with making a peace pack with the neighboring pack. Mate with one of his daughters for peace. That all ends on the night of his last night of fun party.

Liam is a very powerful demigod who works for the council. He is what is called the fixer, but almost all of his fixing ends in death. His real name is Lykos, but Liam seems to fit better. One night of fun leaves him with a fated mate. But with one phone call and Liam hearing it wrong, he leaves. Now some ass needs to be kicked.

I read this story after I read another book that is connected to this series. I have to say that even though this book was funny as hell, it also has some big problems. It comes off as a very rushed story. The alpha or soon to be alpha comes off very weak and not at all what an alpha should be like. Also a true demigod would not offer help even after he thought he was not wanted. It sounds wrong from the start. The chemistry felt like it was being forced, the story flowed way to fast and the dialogue was off.

The next issue is it went from party, to sex, to pictures and a broken treaty. The author left out quite a bit of that information which would have made the story more believable. Also you bring in a fixer to find out who took the pictures is not what I would think would be an acceptable thing for a killer. It really could have been done without this in the story.

Now even with those issues, I actually found myself having fun with it and can’t wait to read the next book. I just hope that it is written better. There is great potential.