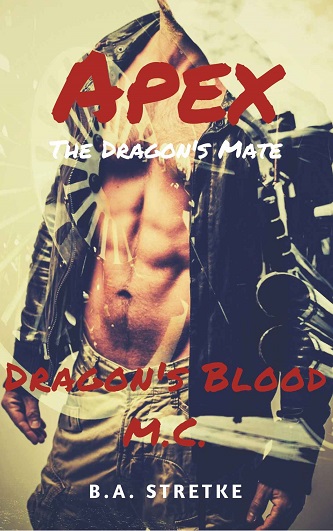 Blurb: Apex: The geometric center of a turn. The point at which a turn is negotiated at the highest speed and the motorcycle’s direction has changed.

Calum Keith is the leader of Dragon’s Blood Motorcycle Club (M.C.) and the Chieftain of Clan Keith, a Clan of Scottish Dragons who accepted a quest from their King to come to America and find their fate-chosen mates. A seer told them that where they encountered one mate, many others would also be found. The Clan has ridden the back roads of America for nearly 100 years looking for the answer to their quest. In a small café in the High Plains Wyoming town of Laramie, Calum Keith runs headlong into a young man named Chance Bashford. This is Calum’s destiny, and Chance might just be the love of his life. Before that, they must overcome the harsh upbringing and lack of care that Chance has endured during his short twenty-one years on this earth. If Calum plays his cards right, he just might win the heart of his beloved. However, like any quest, danger lurks around every corner. A rogue wolf pack has made Laramie their home base, and they have their sights set on Calum’s love. Calum and his gang of Dragon’s must face this threat head on if they want a chance at putting down some roots and seeing what the winds of the high plains have in store for their Dragon Clan.

The Quest is just beginning.

Review: Calum’s dragon scents his mate after entering a cafe but scares the man, Chance in the process of following him. After many years of him and his crew traveling he finally realizes why they never felt settled anywhere they went. The time was not right until he found his mate. But Chance is in a dangerous situation that he doesn’t realize he’s in and it’s up to Calum to save him from a rogue wolf pack.

A story full of drama, misunderstandings, danger and tense situations as well as sweet and tender moments. I enjoyed reading about Calum and some of his dragons as the story progressed. I am looking forward to reading more about the other members of the motorcycle gang as the series continues.