Hi guys, we have Charley Descoteaux visiting today with her upcoming release Art House, we have a brilliant guest post, a great excerpt, and a fantastic giveaway, so peeps check out the post and leave a comment to enter the giveaway! ❤ ~Pixie~ 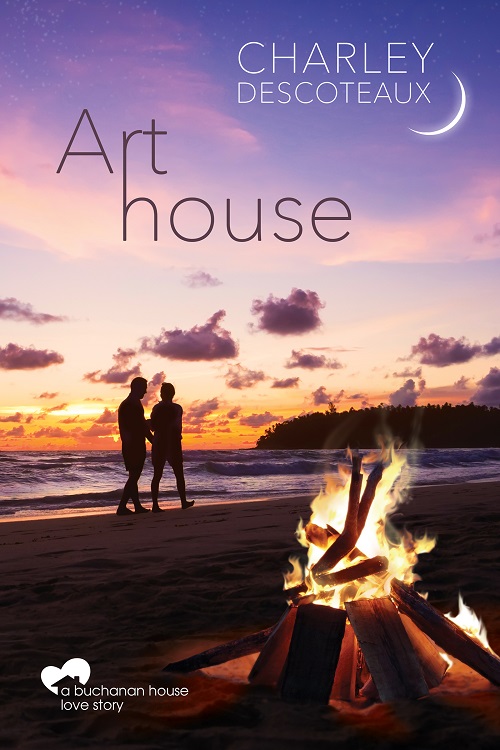 Chase Holland spends his days painting Portland scenes to hang in local businesses, neglecting his own surrealist style. After twenty-five years as a full-time artist, he’s frustrated that his career has stalled, but churning out the equivalent of corporate art is better than getting a day job. Chase and Garrett have been together—off and on, but mostly on—for a decade. If asked, they would both say the source of their trouble is the seventeen-year age gap. The truth is less clear-cut. Life would be so much easier if Chase could make a living with his own art, or if Garrett held less conventional ideas about relationships.

Garrett Frisch has been watching their friends get married for the past two years, and it’s taking an emotional toll. When he proposes as a way to keep them together permanently, he thinks he’s being responsible, but Chase is ambivalent and hurt and can’t hide it. It doesn’t help that Garrett’s anxiety is out of control and he’s dealing with insecurities about his own art career. They will have to do their least favorite thing—talk about something more important than which food cart to visit—if they are to get the happy ending they both want.

Hello! I’m thrilled to be back at MM Good Book Reviews to kick off the tour for my upcoming release Art House! Thanks for having me!

This tour is especially exciting because it’s for the final book in my Buchanan House series. Art House, Buchanan House: Book Six is the longest novel in the series because it has to give Chase and Garrett their HEA while also tying up a bunch of threads from previous books. I hope you enjoy the final result, it was a challenge to bring it all together—but a fun one!

Since I was a baby writer, I’d always wanted to write a series of books featuring a house. One of my favorite authors did that, and as a kid who grew up in apartments I’ve kind of been obsessed with houses most of my life. I considered it an Impossible Dream ™ to own one of my own. Until now! I’ve just bought a small cottage in a cute little neighborhood and as I write this I’m surrounded by packing boxes and the happy chaos that goes with them!

It’s easy to romanticize what it will feel like to have a dream come true, and I expected that if I were ever able to buy my own home it would be the happiest time of my life (well, second after having my daughter 😊). Buying a home turned out to be a lot more stressful and complicated than I’d expected. I’d thought that the hardest part would be saving the down payment—and the down payment came with its own (very literal) kind of pain—but all the forms and processes and endless documents were overwhelming at times. Even when I was tempted to give up, I hung in there, and the date this post is set to go live is the day I’ll be moving into my new home! I won’t be living at a beach resort, but my little ranch-style condo at the end of a cul de sac is the next best thing as far as I’m concerned. And it’s all mine.

In honor of my moving day, here’s an excerpt from Art House that takes place partially in a U-Haul. I think the only unfamiliar character for series readers is Jess, and she’s Garrett’s BFF. We’re in Chase’s POV here and you might remember him as the painter whose art hangs in the restaurant Paulie founded in Tiny House!

Stick around after the excerpt and leave a comment. Every comment during my tour will be an entry in my giveaway. At the end of the tour everyone’s name will go into a hat and the winner will get a signed paperback of Art House, some Buchanan House and Dreamspinner swag, and a surprise or two. This giveaway is worldwide. 😊 After a short argument between Garrett and Jess over who would drive the U-Haul, they left the garage and fell in behind Bran’s car. Chase hated to admit it, but he was relieved not to even have been in the running to drive the truck the three hours to Lincoln City. He’d never enjoyed driving and was content to sit on Garrett’s right side while Jess drove on his left. Chase spent most of the drive watching the scenery and listening to them talk. Garrett had spent the past few days working on something he didn’t want to share yet and jumping Chase every afternoon for some hard-and-fast sex—noticeably lacking in penetration—but as Jess had pointed out, they’d done little talking.

Chase still hadn’t figured out how he felt about that by the time he saw the Welcome to Lincoln City sign. Garrett snaked the hand that had been resting on Chase’s thigh around and underneath, pulling his leg closer as he leaned against his side. When he squeezed gently, Chase turned to see a little unease in his smoky hazel eyes. It disappeared as soon as he smiled.

“You’ve been quiet.” Garrett didn’t make that sound like a question, but Chase heard one just the same.

“Thinking about a project and watching the world go by.”

Jess stopped the truck at a light and looked at Chase over Garrett’s head. “You know where the house is? Bran lost me.”

Chase turned to look out the windshield and felt a little startled not to have noticed. He pulled out his phone and opened the GPS app, and a few minutes later they’d begun to unload the truck. Thankfully, unloading took far less time than loading had; they put everything in an empty bedroom for Kyle and Bran to deal with later.

He was standing on the back porch with a beer, staring out at the work-in-progress garden and trying not to think about anything in particular, when Jess joined him, clapping him on the shoulder as she came. Like you would do to a horse so he wouldn’t kick you in surprise.

“Today’s not so easy for you,” she said.

When he glanced her way, Jess took a long drink from her beer.

“Yeah.” Chase fought the urge to sigh or to go look for Garrett. If they were staying for the whole long weekend—and he assumed they were—he had plenty of time to be adorable with Garrett once they reached the camp.

“You guys really didn’t talk about this weekend. Like, at all, did you?”

“Garrett’s been busy on a new secret project.”

“If you’d rather I went back to town today—”

“No.” Chase turned to face Jess. “Don’t think I’m all moody because of you. I’m glad you’re here. If you can spare the time, you should stay.”

“Yeah. They’ve been cutting my hours at work, so I have plenty of time.” She grinned bitterly and turned back to face the garden as she took another pull of her beer.

“Where do you work?”

“In a warehouse in Milwaukie. It’s so glamorous, driving a forklift, loading frozen food onto trucks.” She turned her face up to look at the sky, smiled, and drained the last of her beer. “But it keeps me under a roof and flush in beer and edibles, so I’m good.”

They stood in silence for a few seconds, watching a small group of trees in the far corner of the backyard as their leaves waved in the breeze. Chase felt awkward around Jess, maybe for obvious reasons. He didn’t like it but couldn’t figure out how to push past it either.

Jess sighed. “I’ll be glad when you loosen up a little. Maybe when we get to Buchanan House I’ll share a little something to take the edge off.”

Chase assumed she meant edibles, but before he could answer, the sliding glass door opened behind them.

“Looks like we’re done here.” Garrett sounded upbeat, like he was looking forward to going to Buchanan House, and that made Chase smile.

Maybe this weekend will be good for us. We can put an end to the whole not-talking thing. Win a a signed paperback of Art House, some Buchanan House and Dreamspinner swag, and a surprise or two!

Every comment during the tour will be an entry in the giveaway.

(At the end of the tour everyone’s name will go into a hat and the winner will be picked. This giveaway is worldwide. )