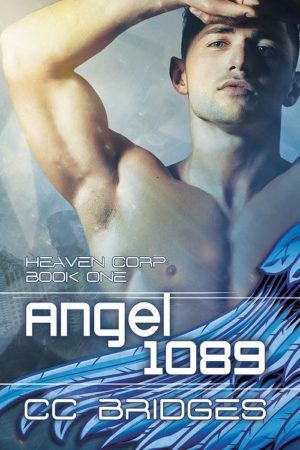 Blurb: A deal with the devil….

Gabriel 1089 is an angel—an enhanced and cybernetically modified human designed to protect the city in the sky called Heaven. He follows Heaven’s orders and fights its enemies. But when an attack by demons leaves him trapped on the earth below, missing both a metal wing and his network-enabled halo, he’s cut off from his home for good and at the mercy of one man.

Jeff Werth is used to demons in need of his mechanical expertise showing up on the doorstep of the junkyard he runs in Old Trent. However, he doesn’t expect to be stuck with an injured angel. Jeff owes the demons for saving his daughter’s life, so he does what they demand—he nurses the angel back to health and keeps close track of him as a possible pawn in the high-stakes war between Heaven above and the demons below. But he doesn’t expect the effect Gabe has on his heart, or having to choose between his daughter and the man he’s come to love.

Review: Gabriel 1089 is a genetically modified angel. He volunteered for the program not knowing what at it entails. Now many, many years later he finds himself in Jeff’s care with no memories except for when he was attacked by demons.

I found this story fascinating. The angels are not what I would call angels myself. They are humans that have been modified. To make matters worse they have no free will. Everything they do is controlled. They are sent out on missions to do what the controller wants. My heart blend for these people.

Any form of slavery is wrong. I detested what was happening to these men. Surprisingly the demons seemed to be the good guys in this awesome story. Yes they attacked Gabriel and left him stranded on earth but they had an ulterior motive. They want to take down the angel system and free those that have been trapped.

Jeff was a great character with a sad tale. But he helped Gabe as best he could. You could feel the chemistry between these two. With Gabe’s memories coming back he had a lot to struggle through. Jeff was there to help.