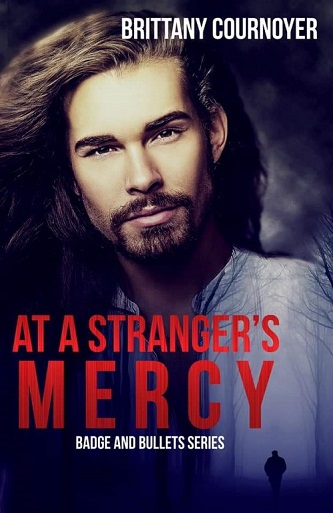 Title: At A Stranger’s Mercy

Blurb: Making eye contact with a killer wasn’t exactly how Bradley Danforth had planned to start his day. As an accountant, he craved structure and routine. What he hadn’t anticipated was being part of a real-life murder mystery with him cast in the starring role.

Death and sorrow were part of Max Donohue’s job description, leaving the detective hardened after years on the job. On his latest case, he’s the one stuck protecting the only witness in a sadistic homicide.

One death becomes two… then three. And soon Max and Bradley find themselves playing a deadly game of cat and mouse. Can Max save Bradley from the clutches of a serial killer? Or will the killer finish what he started?

At a Stranger’s Mercy is the first installment of a continuing series featuring the same two characters. It’s a suspenseful murder mystery that depicts detailed crimes, strong language, and adult situations. While this series will include a romance, it’s a slow burn that develops throughout the series.

Review: Bradley is unlike many men I have come across and I wasn’t too sure of him. He was an accountant that loved numbers and their mystery. He had a routine that he lived by and the one time it failed was going to be a disaster. He knew something bad was around him but could not figure it out. That is until he drove by and saw a monster’s eyes. Being a witness to a possible murder was not what he expected nor wanted. Then the monster came for him and it was up to the detective in charge to help him.

Max is a grouchy asshat who needs a personality change. Very little sleep and one nasty murder has him on edge. However when he met the only witness lets say things don’t go the way one expects. Then when Bradley is attacked it changes the game.

Three murders and not very many clues has Max looking everywhere but the surprises never stop. This story definitely could give a reader nightmares. I did not look at the blurb when I started reading this so I was a bit disappointed that there was no sign of a romance, well until the end. Also lets face it these two characters are not easy to connect with nor like. If I had to pick one I would say that I did like Bradley more than I did Max, but that would be pushing it. They are both asshats in their way. Another was when Bradley gave his secret location away to someone that might be considered a friend shows that he might have brains about numbers but not in other areas.

The murders are freaky and down right nasty. The author really put in a lot of work to make it nasty which was a plus for the story. It was definitely unique and very fresh with ideas. It was a on the edge of your seat type of story and very well written. I am not one that reads stories by authors I have never read before but was glad to have read it. I can’t say that I would read this more than once but I will wait to see what the next book has in it. I also never expected who the killer was. It was a shock. I will admit that Max was a challenge because you could see that deep down he was a good guy and truly wanted to help.

The twists and turns this book had going on were a major thrill for me. This story was a great start to a new series and I look forward to reading more.